Almost across from the Alexander L. Wade house on Wagner Street is yet another house that's on the National Register of Historic Places listings in Monongalia County, West Virginia.  This is the Waitman T. Willey house. 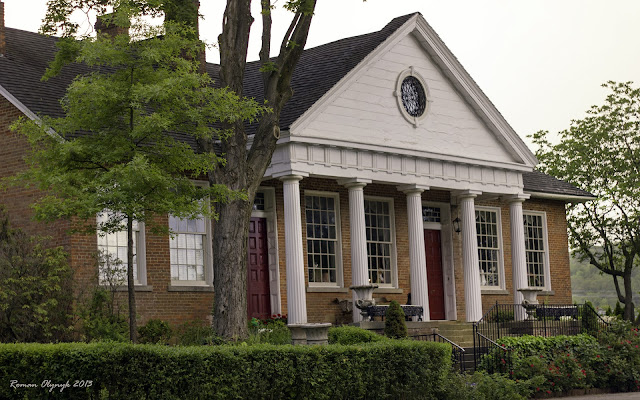 Willey built this house in 1840.  He later went on to serve as one of the first senators in the newly created state of West Virginia in 1863.

This picture was an experiment.  I had originally had the idea of re-shooting the Wade house with my Canon "nifty" 50mm f/1.8 lens.  My plan was to try another "golden hour" sunset shot with the lens wide open at f/1.8.  But the nifty 50 is a prime lens, so there's no zoom capability.  I couldn't find a good distant location to frame the image -- too many trees.  So I turned my sights on the Willey house.  This was still a challenge to frame, but I think I managed.

Sunset on Sunday, May 19, when I took the picture, was around 8:10 p.m.  This shot was taken at approximately 8:06.  The sky was overcast; it even started to sprinkle a bit on my walk home.  I adjusted the curves slightly in PhotoShop to bring out more of the white on the portico.  By the way, that's not blurring or distortion on the portico siding.  Someone really went heavy with the paint.