Even thought I'm not very good at it, I love macro photography.  I've written recently about my experience with a new flash unit, and I've tried to make more use of it.

One of the problems I've had for a long time is wrestling over depth-of-field.  My trusty Canon EF-S 60mm f/2.8 Macro USM lens has served me well over the years, but because of natural light, I was prone to shooting it wide open at f/2.8.  Thus the shallow depth of field.

It's possible to teach an old photographer new tricks, though.  With a ring flash, there's no reason why I couldn't stop down.  My macro lens can stop down to f/32, so I gave that a try.  The first problem I ran into at f/32 was that my shots were dark.  I compensated to this in Lightroom, where I was able to recover amazing detail.   I do need to learn how to goose up the strength of the flash, if it's possible.

But the low f-stop really made a difference. Here are two recent shots: 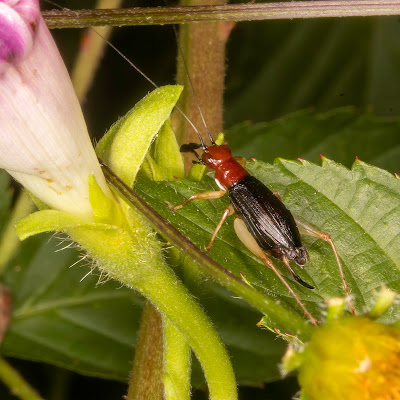 This is a Red-headed bush cricket (Phyllopalpus pulchellus) sitting rather boldly on the leaf of a miniature rose at my house.  A here's a real beauty: 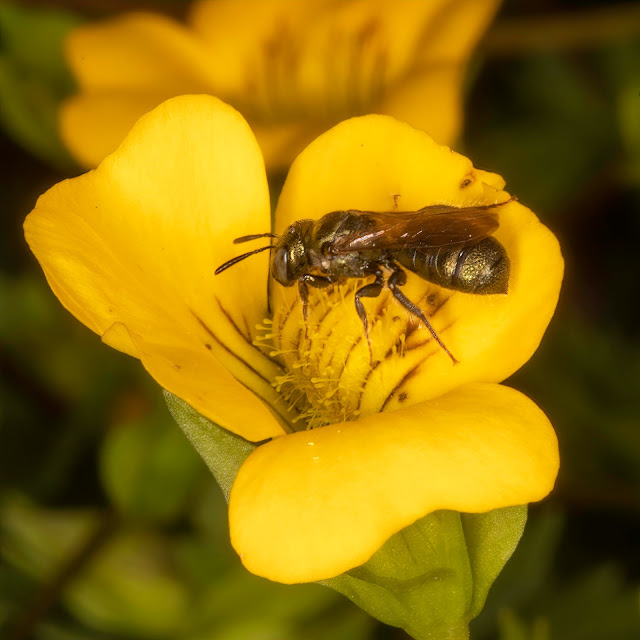 It's a tiny little sweat bee belonging to the genus Augochlorine.  I would normally have to create a focus stack to get this kind of DOF, but shooting at f/32 did a darn good job for a lot less work.

Now, this shot wasn't quite this sharp to begin with.  I ran it through a couple of plug-in filters that I had bought from Topaz Labs:  Sharpen AI and DeNoise AI.  I'll have to tell you more about those later!

I while back, I managed to score a Canon EF 50mm f/1.4 USM lens on ShopGoodwill.com. As always, a Goodwill auction purchase is "as is."  Turned out that both automatic and manual focus on the lens would not go below four meters.  There has apparently been a long-standing problem of this sort with that lens.  It has a part with a design flaw that makes it very easy to damage. A repair company was able to replace the flawed part with a redesigned one that isn't as easy to damage.  It wasn't a cheap repair, but it's not a cheap lens, either.  Of course, the lens also got a thorough cleaning as part of the repair.

Although I already own a couple of 50mm f/1.4 lenses, they are both vintage, manual focus lenses.  Perhaps because of that, I hadn't been as attuned to their superior light gathering properties. Since this new one is made to work on a Canon digital SLR, I can more easily appreciate the superior optics.  Foremost is that the lens can work really well in low light and natural situations.

Another great feature of the 50 is the focal range.  It's great for portraiture because it give a nice blur to the background.

Here's one of the best shots I've taken with this newly repaired lens: 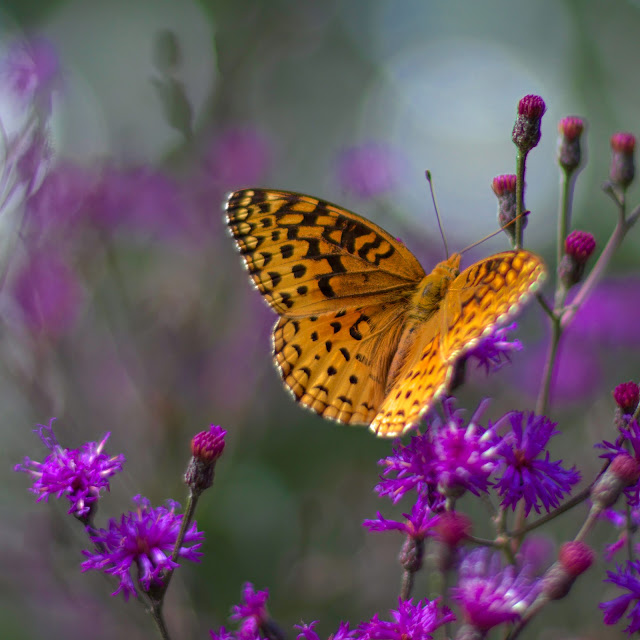 This is a great spangled fritillary butterfly on an iron weed. I shot it with the lens wide open at f/1.4, where it is said to be "soft."  Note the dreamy background, which is the woods behind the flower.  If I want sharper pictures, I'll need to stop it down to at least f/2.0.

Despite this newer, easy-to-use lens, I'm going to find it difficult to part with my Konica 50mm manual lens. I'd love to compare the image quality side-by-side with these two lenses.  Perhaps another day. 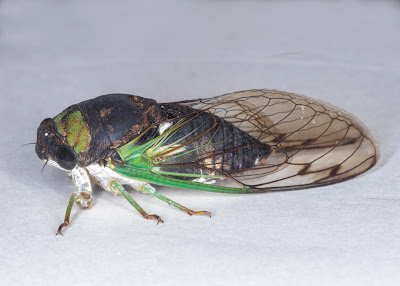 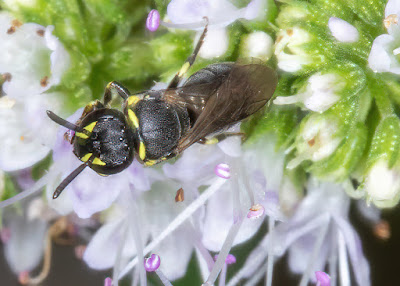 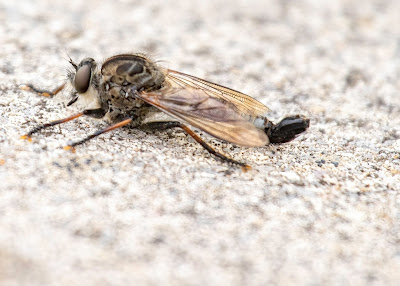 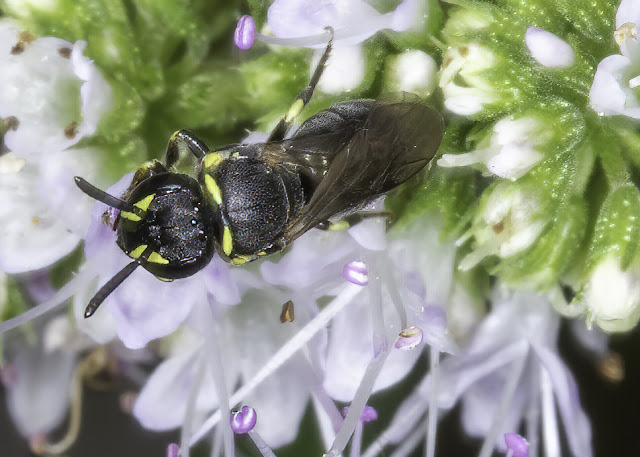 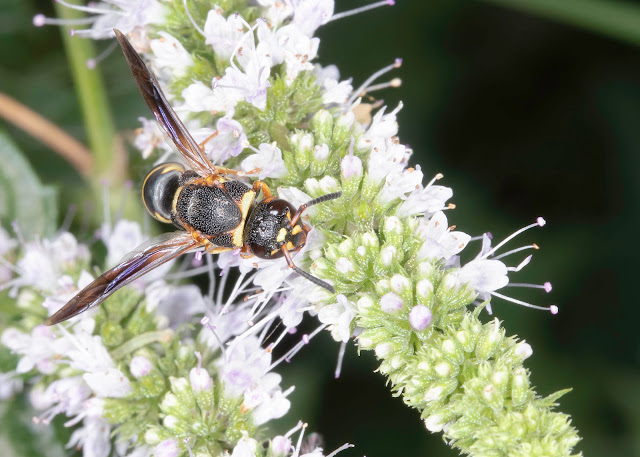 It's ironic that I've waited this long to post anything this year.  Here it is, already August 5th.
Due to the ongoing Coronavirus pandemic, I've been working from home since the middle of March, maintaining my social distancing from my coworkers and the rest of society.  Being an introvert by nature, I can't say that this has been a hardship for me.
This is all being described as The New Normal.TM   "Normal" for me is working in relative solitude, saving money on gasoline, and having my "therapy cat" visiting me every day in my "office." 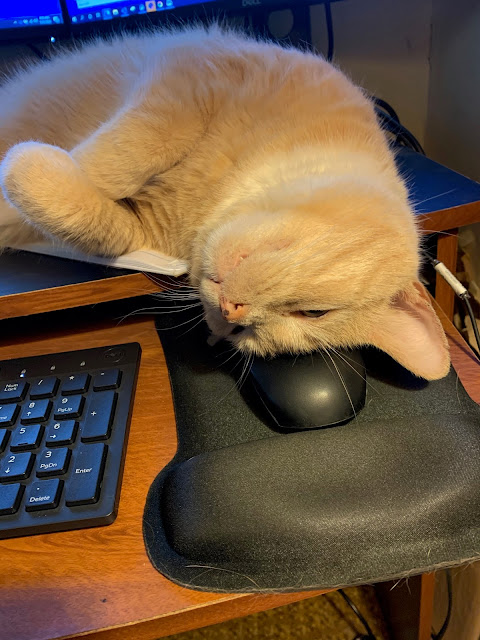 For the record, West Virginia has not been hard hit by the pandemic, but it has not remained untouched.  Morgantown has seen a modest increase in the number of cases in the past month.   With University classes about to start, the number of cases will likely grow.  However, incoming students as well as faculty are being tested.  The number of positive cases has hovered at 1.5% or below up to this point.

Posted by Banewood at 9:41 AM No comments: