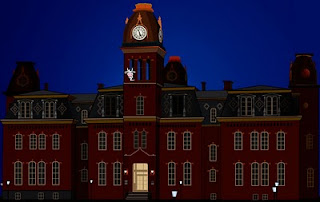 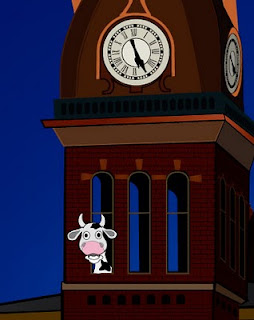 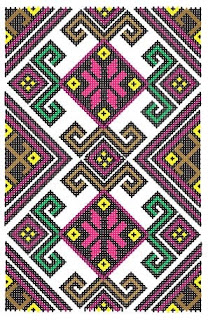 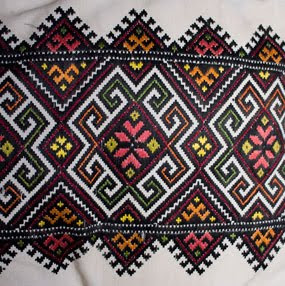 Still on the subject of Ukrainian rushnyky, I thought I'd take on one of my mother's pillow embroideries (left).

She does these patterns free-style, with no design in mind when she starts. My interpretation used a single, uniform cross-stitch, whereas my mother's original features a variety of stitching styles.

I flipped the central portion and made it into a repeating brush pattern (right). It's funny how the eyedropper tool in Illustrator interpreted the orange-gold color -- it came across more bronze in Illustrator.
Posted by Banewood at 9:19 AM No comments:

Some time ago, I showed off a few faux cross-stitch patterns of traditional Ukrainian "Rushnyky," literally towels.

I doubt I could claim credit for applying the techniqe of using a cross-stitch "X" pattern to build an elaborate design in Adobe Illustrator, but I came up with the idea on my own and developed it through experimentation. 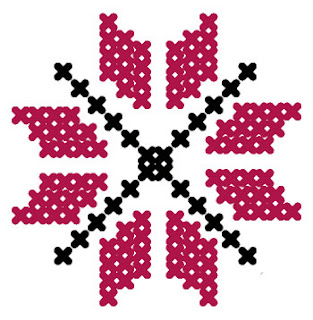 Once you have a few patterns, you can start to replicate them and lay them out into a larger work. Here is a completed rushnyk from a design I copied: 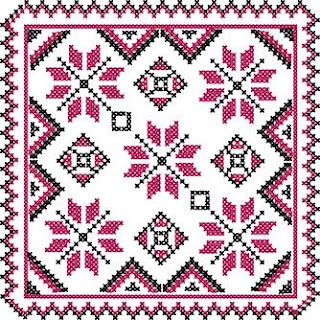 There's a really cool trick you can do in Illustrator, where you can take something you've designed and make it into a pattern brush. The pattern brush can then be applied to a vector shape like a line, rectangle or circle. The basic square of this pattern lends itself particularly to a rectangle, because you can designate a specific design to be a corner piece in your brush pattern.

To do this, I first stripped away the outer zig-zag border. Here's what the replicated squares would look like in a corner pattern: 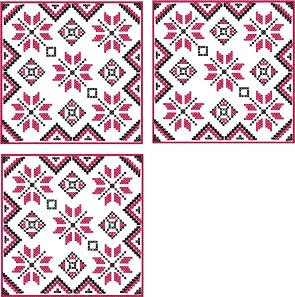 Once the pattern brush is complete, you can begin applying it. Here is a circle within a square with the rushnyk brush pattern applied: 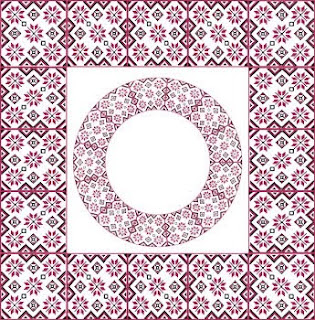 I read this morning that with health care reform now "repealed," the GOP congress is going after climate change. Just like health care, the GOP sees any attempt to regulate greenhouse gasses as being job-killing.

According to Rep. Fred Upton, R-Mich., "We will be active and aggressive using every tool in the toolbox to protect American jobs and our economy by rolling back the job-destroying (greenhouse gas) regulations." (I suppose the Republicans' filibuster against the auto industry bailout last year was also done out of concern for jobs.)

It just so happens that I've obtained a hither-to unknown wikileaks release on the GOP's agenda for this year:

Posted by Banewood at 8:09 AM No comments:

The GOP-controlled congress is living up to its promise of trying to roll back health care reform. HR 2 has been given the odd name of Repealing the Job-Killing Health Care Law Act. The words Repealing and Killing have negative connotations, however. If the GOP would take my advice -- they won't -- they should name the bill positively, say Save the Weasels Act.

Make no mistake about it -- since the current health care reform law has made it illegal to cancel an insurance policy because of a pre-existing condition, Insurance Policy Processing Clerks have been having a tough go of it. Many of these weasels, whose job it is to cancel insurance policies, have been out of work. You'd think that the GOP would have extended jobless benefits to these, their brethren. But they are looking at the big picture. If they help the insurance companies recover their enviable ability to cancel policies, then the weasels will have their jobs back. Brilliant!

Besides, weasels don't contribute much in the way of campaign donations.