The Golden Ragwort (Packera aurea, formerly named Senecio aureus) has been an absolute pain in my ass.  Yesterday, April 29, was the third time that I've tried to get a decent picture of it. 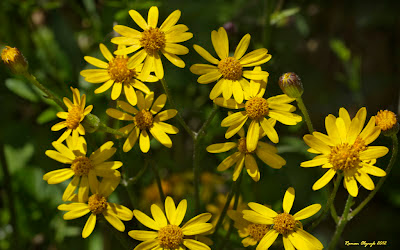 My first attempt to get a shot of this native plant was several weeks ago, near Little Falls, when I found a solitary specimen of this plant growing on a damp embankment along the Mon River rail trail.  Unfortunately, I had no idea just how damp that embankment was!  When I jumped across to what I had hoped would be somewhat dry ground, I instead managed to sink my foot into some deep muck that sucked the running shoe right off of my foot.  I gave up on a picture, and I biked on for another 45 minutes with dampened spirits.  Later, I was able to hose off the shoes, but I threw away my socks.

By the time I had gone biking again, I found more plants growing in somewhat drier areas.  Unfortunately, however, it was breezy that day, and I didn't not get a single acceptable shot of this plant.  The little buggers would not stop moving about.

As they say, the third time is the charm.  Fool me twice; won't get fooled again.
Posted by Banewood at 8:51 AM No comments:

Canada violets (Viola canadensis) were in their prime around the vicinity of the Opekiska lock and dam on April 20. This violet  lives up to its other names: Canadian white violet, Canada Violet, and tall white violet. It's fairly tall, as violets go, and it has huge white flowers.

Zooming in on the flower in the lower picture, you can see sone of its trademarks:  a yellow base at the petals, and a purplish tinge around the petals. It's a beauty, but the large white blooms make it a challenge to photograph a good exposure. 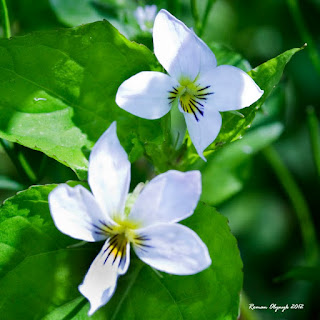 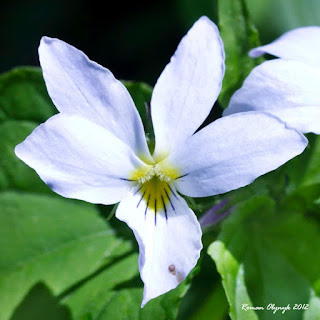 Posted by Banewood at 8:58 AM No comments:

I spotted a Geranium

Wild Geranium (Geranium maculatum), a.k.a., Spotted Geranium or Wood Geranium. This one has a little fly trying to hog its way into the picture. According to this site, wild geranium can be used as a salad green. It can also be used to treat dysentery and diarrhea. It also acts as a blood coagulant. 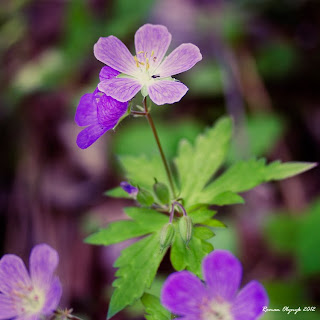 Posted by Banewood at 7:59 AM No comments: 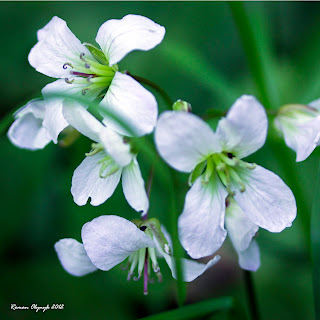 I had screwed up previously, and mistakenly identified it as a Cutleaf Toothwort (Dentaria laciniata); although the flowers are more or less identical, the leaves are quite different.
Posted by Banewood at 6:23 PM No comments:

Meet the Miterwort (Mitella diphylla), a.k.a., Twoleaf Miterwort and Coolwort. These plants have delicate little flowers growing on slender spikes.  I found them growing in the shaded woods along the rail trail between Little Falls and Opekiska lock and dam. 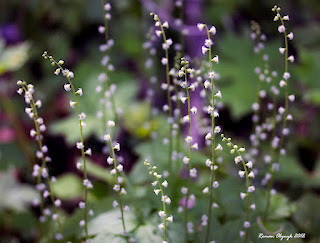 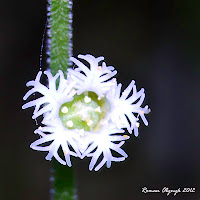 The plant belongs to the Saxifragaceae family.

You have to look very closely to appreciate the bloom (right), which to my eye looks more like a snowflake than a bishop's miter.

Now, meet the Foamflower (Tiarella cordifolia), a.k.a., Allegheny Foamflower, False Miterwort, or Coolwort.  They were growing in large patches beneath trees, situation between the rail trail and the river, about half-way between Little Falls and Opekiska lock and dam. 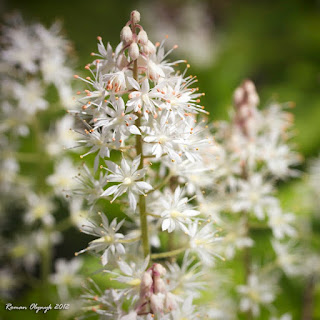 On the shoulders of dwarfs

Friday, April 20, was the last nice day of the weekend, so I managed to take the afternoon off to do a little biking on the Mon River trail.  This time, the Dwarf Larkspurs (Delphinium tricorne) were in their prime.

Also known as Spring Larkspur, this native plant is said to be the most frequently seen species of Delphinium east of the Plains states. The ones I was seeing ranged from an almost pure white to a violet blue.   Here's a closeup: 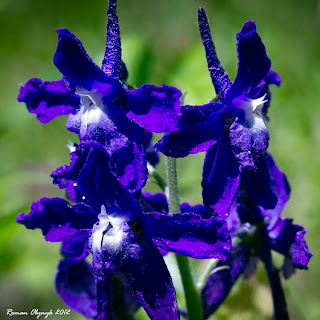 Some of the other plants I saw include:
I'll try to cover these over the next few days.
Posted by Banewood at 10:50 PM No comments:

Onomatopoeia is a word that imitates or suggests the source of the sound that it describes. A NewScientist Zoologger piece I had read, Zoologger: Meet the polar bear's replacement, whimsically suggests that Hákarl, an Icelandic dish made from rotten shark, may be such a word:


Greenland sharks are perhaps best known as the main ingredient in hákarl, an Icelandic speciality prepared by burying the shark in gravel for several months to ferment the flesh. The result stinks of ammonia and many people struggle to keep it down. One blogger sampled it and wrote: "Hákarl is in fact a good approximation of the sound your throat makes as it contorts and constricts in a desperate attempt to regurgitate the chunks of fetid fish."

Ah, the things that one learns.
Posted by Banewood at 10:36 AM No comments:

It has been a while since I have done any pysanky in Illustrator. One design in a YouTube animation that someone had sent me caught my eye. Here it is in a screen grab, which shows a novel (to my eye) pysanka design: 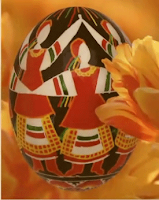 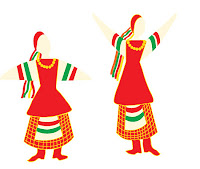 I used the "place" command in Illustrator to lock this image down so that I could trace out the shapes of the dancers.
A couple of transforms to daisy-chain the dancers into rows, and then I made that grouping into a symbol.

From symbol to egg, here is the final pysanka: 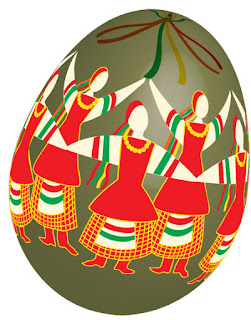 Although this is far from a typical pysanka motif, these dancers depicted here are a performing a rite of Spring known as Vesnianky-hahilky.
Posted by Banewood at 11:09 AM No comments:

Virginia Bluebells (Mertensia virginica) were growing in the low areas beneath the Mon River rail trail. They presented a particular challenge to photograph because of the dim light and breezy conditions. I thought I'd try the built-in flash for help with the fill. The result was a mixed bag: I got a decent exposure, but the surrounding vegetation is busy and detracts from the overall composition. 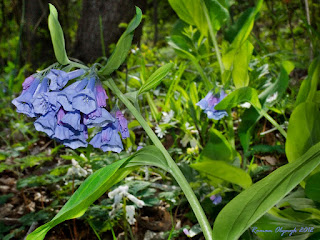 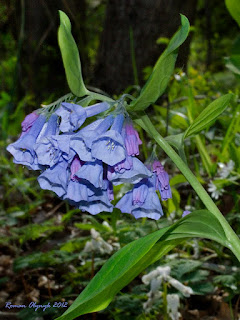 The previous days' posts were all shot from the vicinity of a point on the Mon River rail trail known as Little Falls.
The following picture is not Little Falls; I shall name it mini-Little Falls. There's little here to provide scale, but my best guess is that the rock face is perhaps 12 to 16 feet. 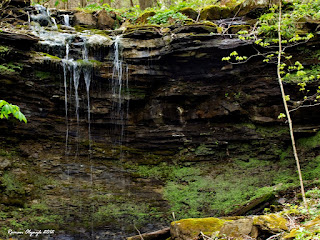 Posted by Banewood at 9:06 AM No comments:

Easter on the Rail Trail

Today's revist to the Mon River rail trail in the vicinity of Little Falls brought a few rewards. 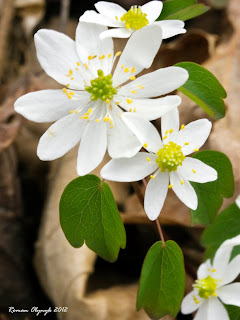 I had previously mistaken the Star Chickweed for a Rue. It was a dumb mistake, because I should have paid more attention to the leaves. The Rue, as you can see above, has a three-lobed leaf.


Below is yet another first-time flower shot for me. This macro shot looks like an alien face hugger should be coming out of this bloom. It's the flower of the Wild Ginger (Asarum canadense). If you look carefully, you'll see a little bug sticking its head into the center. 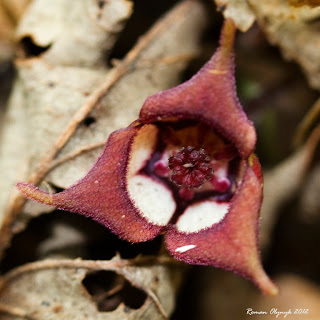 Posted by Banewood at 4:47 PM No comments:

Do you know Jack? 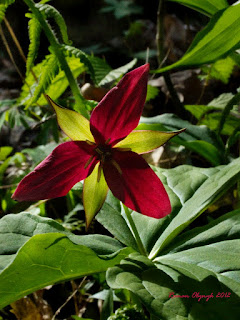 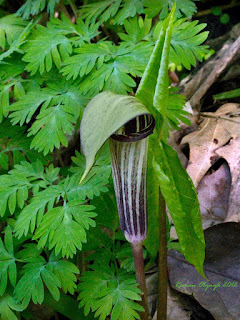 On Thursday afternoon, April 5, I took a short bike ride on the rail trail south of Little Falls. I was surprised to see a lot of wildflowers that I hadn't seen on my previous ride on April 1st.
The difference is likely due to the combination of time and geography.

Here are four of the nicer finds.

On the left: Red Trillium (Trillium erectum). It was growing on a steep hillside, so the sun was giving it a natural back lighting.  On the left: Jack-in-the-Pulpit (Arisaema triphyllum).
Below: Dutchman's Breeches (Dicentra cucullaria) and Bluets (Houstonia caerulea). The Bluets were higher up in the woods on the road to Little Falls. 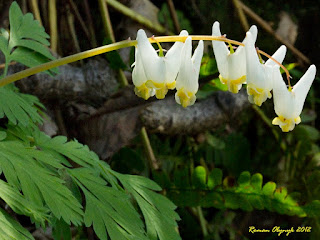 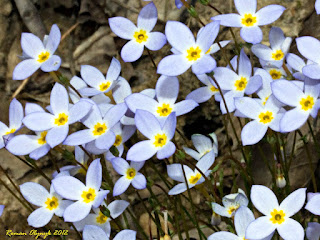 Spring Beauty (Claytonia virginica). This flower is always a challenge to photograph because of its shiny petals. Something I didn't know is that the seeds of this plant have a coating called an elaiosome, which is rich in lipids and proteins. Ants feed the elaiosome to their larvae and then dispose of the remaining seed, thus helping to disperse the plant. 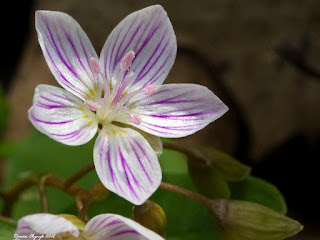 Posted by Banewood at 3:10 PM No comments:

Large-flowered Trillium (Trillium grandiflorum). This is an early bird. Soon the hillsides will be white with them. Shot on the rail trail between Star City and Point Marion. 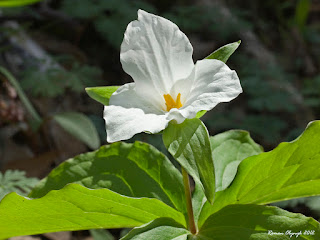 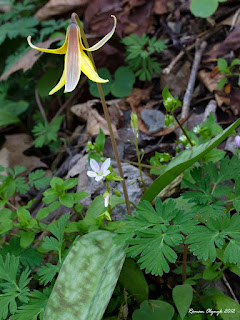 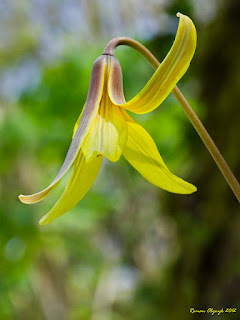 Erythronium americanum. This is the first year that I've been able to "capture" one with a camera. They're supposed to commonly appear in clumps, but I've only found solitary plants on my hunts.
Posted by Banewood at 8:00 AM No comments: 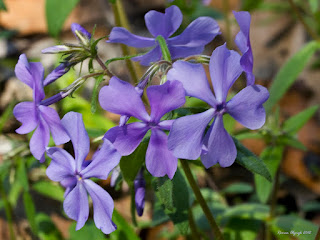 These were the prominent bloom on the rail trail north of Star City on April 1st. Known as Squirrel Corn (Dicentra canadensis), they look like white Bleeding Hearts. 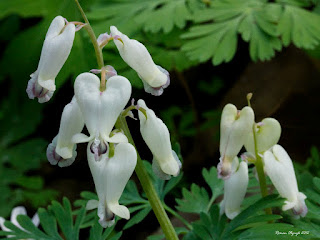 Posted by Banewood at 8:42 AM No comments:

April 1st bike ride on the bike trail north of Star City. This is a Star Chickweed (Stellaria pubera) growing on the hillside. 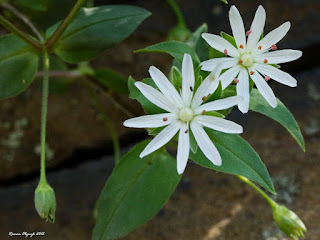 It was an eventful 8-mile ride. I saw the following:
In addition, I got to see a half-dozen or more garter snakes in a group. They must have recently come out of hibernation together. If I'd had my wits about me, I would have taken a video. :-(