The ten "secrets" are thoroughly presented in a format that lists the problem, the solution, the risks involved and how to stay safe.

12 Things that I Hate about You

Seth Stevenson's Slate.com article, There are 12 Kinds of Ads in the World, provides a useful framework around which all advertisements are broken down into twelve basic types. The categories are the work of advertising executive Donald Gunn. The Slate article also features a slide show, which highlights each advertising format and provides a related video link. You can't get away from the advertisements, though -- you have to disable pop-up blocking from Slate to get the navigation bar of the slideshow to appear.

To err is human, but to really foul things up takes a computer.

According to the article, investigators had created situations for each system “in which these weaknesses could be exploited to affect the correct recording, reporting and tallying of votes.”

Investigators had found possible problems not only with computerized touch-screen machines, but also with optical scanning systems and broader election-management software.

Executives for the voting machine industry countered that the tests had not been conducted in a realistic environment (such as in Ohio during an actual election) and that no machine was known to have been hacked in an election. Right. But if a computer scientist at a university can do it, I'll wager that somebody else could -- and probably did -- do it.

A proposed House bill would require every state to use paper records that would let voters verify that their ballots had been correctly cast and that would be available for recounts.

The 2004 election in Morgantown, WV, was my first exposure to an electronic voting machine. I was surprised and pleased to note that a paper roll on my machine was printing out a corroborating record of my selections. Before that, things were done the old fashioned way -- with little old ladies threading together paper ballots as they were handed in.
Posted by Banewood at 7:56 PM 1 comment:

I'm a newcomer to the work of Max Blumental, but the two latest pieces of his that I've seen have been excellent.

Back on July 18, he had a piece on The Huffington Post titled Generation Chickenhawk: the Unauthorized College Republican Convention Tour. The College Republican National Convention is where the cream of the next generation's GOP get their start, the breeding grounds of future Jack Abramhoffs, Grover Norquists and Karl Roves. It's really something to listen to these well-scrubbed kids parroting the party line about "fighting them over there, so we don't have to fight them here." But to a man, they all have some excuse as to why they aren't over there. All have "other priorities."

Blumenthal's latest piece on Huffington Post is equally chilling. Titled Rapture Ready: The Unauthorized Christians United for Israel Tour, it's about a July 16, Christians United for Israel annual Washington-Israel Summit. These good people are nothing more than evangelical Christians who support Israel. The pentacostal flames that they are fanning, however, are in the hopes that a Mideast conflagration will help to bring about Armageddon, the final climactic battle between God and the Devil. These people want a ring-side seat.

Posted by Banewood at 3:26 PM No comments: 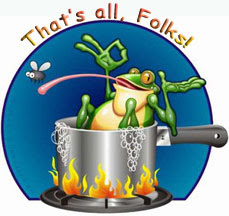 The Reaper has a first name, it's spelled OSCAR

An AP story on MyWay, Oscar the Cat Predicts Patients' Deaths, tells about a Providence, Rhode Island, cat with a predilection for snuggling down with nursing home patients who are within hours of passing away. According to an interview with Dr. David Dosa, who recently had published a New England Journal of Medicine article, A Day in the Life of Oscar, "He doesn't make too many mistakes. He seems to understand when patients are about to die."

On at least 25 occasions, Oscar has been observed to sit beside people who would wind up dying in a few hours.

According to skeptics, maybe Oscar is just homing in on a heating pad that staff will put on a sick patient. However, that doesn't really explain every situation. Some cats just flat-out have psychic abilities. A cat of mine has the uncanny knack of yacking up a hairball in a location where I am most likely to step into it barefooted. This has been observed on at least a dozen occasions.

'The squirrels were carrying spy gear of foreign agencies, and were stopped before they could act, thanks to the alertness of our intelligence services.'

Interestingly, a search of the IRNA web page didn't have any hits on "squirrel." Perhaps I needed a better search term.

On this side of the globe, however, NBC News Producer Ali Arouzi obtained some Tehran man-on-the-street comments to the effect that perphaps these might have been cunning British squirrels, no doubt MI6.

However, at great risk to myself and my secret Iranian contact, I have obtained this exclusive image of one of the squirrels. Judging from the headgear, I think this is one of our boys from Frostbite Falls, Minnesota.

For additional background, NPR's All Things Considered on July 20th carried an analysis piece with interviews by an ex-CIA intelligence expert and a wildlife professor.

Posted by Banewood at 1:59 PM No comments:

Every Picture Tells a Story

Early in the book, Harry Potter and the Deathly Hallows, the under-age Harry Potter could be traced by the Ministry of Magic if he performed illegal magic. Perhaps even magic has a unique signature.

The article cites an Electronic Frontiers Foundation item from July 20, Harry Potter and the Digital Fingerprints. Prior to the official release of J.K. Rowling's seventh and final book in the Harry Potter series, someone had gone to the trouble of photographing every page of a leaked copy of the book with their digital camera, and they made the entire text available through BitTorrent.

By using an open-source program called ExifTool, the folks at EFF can tell us that the leaker of the book had used a Cannon Rebel 300D, what the camera's serial number is (560151117), and more than 100 other facts about the photos.

Out of curiosity, I downloaded the Windows executable of ExifTool and tried it out. The Windows version supports a handy drag & drop interface, where you can drag an image onto the executable and read a CMD-style terminal window listing of the Exif data.

An image that I had taken with the camera in my cell phone contained the cell phone model number and all kinds of other details, including what version of PhotoShop I had used to clean up the image. Another image taken with my Canon PowerShot S60 contained even more detailed information.

I did a non-scientific survey of pictures in the photo sharing site, flickr, and I couldn't find too much information on a random selection of photos, including my own. I checked out the privacy and permissions settings for my flickr account, and I discovered that they have a global setting that lets you hide your photos' Exif data. When I went back to my account and checked on the Exif data for my pictures, I noted that was just barebones information, such as the image type, size and resolution.