On April 27, nestled among the Bluebells that were growing below the Earl L. Core Arboretum were some Dwarf Larkspurs (Delphinium tricorne).  These are native perennials that prefer dappled shade. This seems to be a good year for them, because I saw them pretty much everywhere along my bike ride.

In this first shot, you can see the leaves of the Bluebells growing among the Larkspurs. 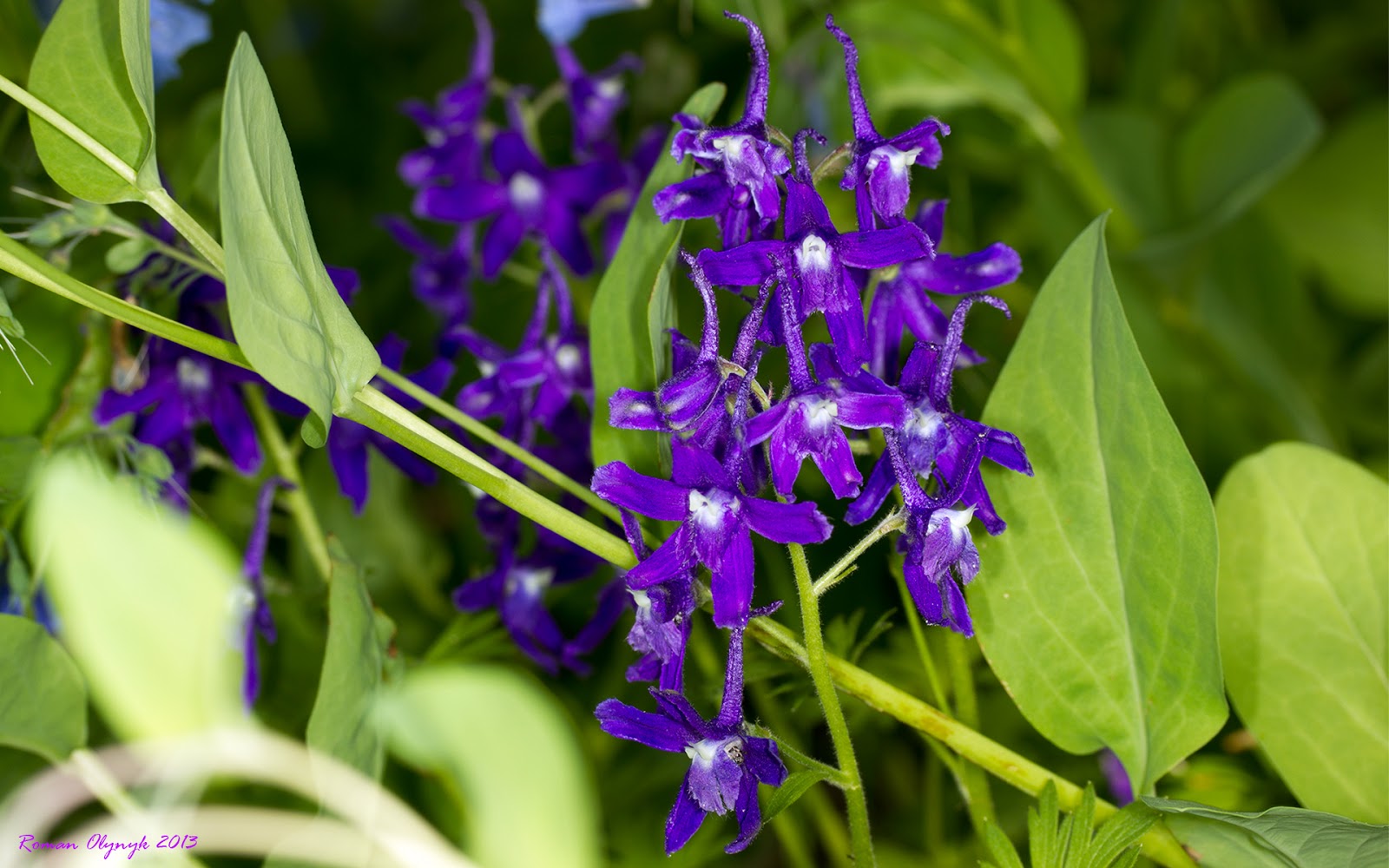 Here's a closeup shot taken further down along the river trail. 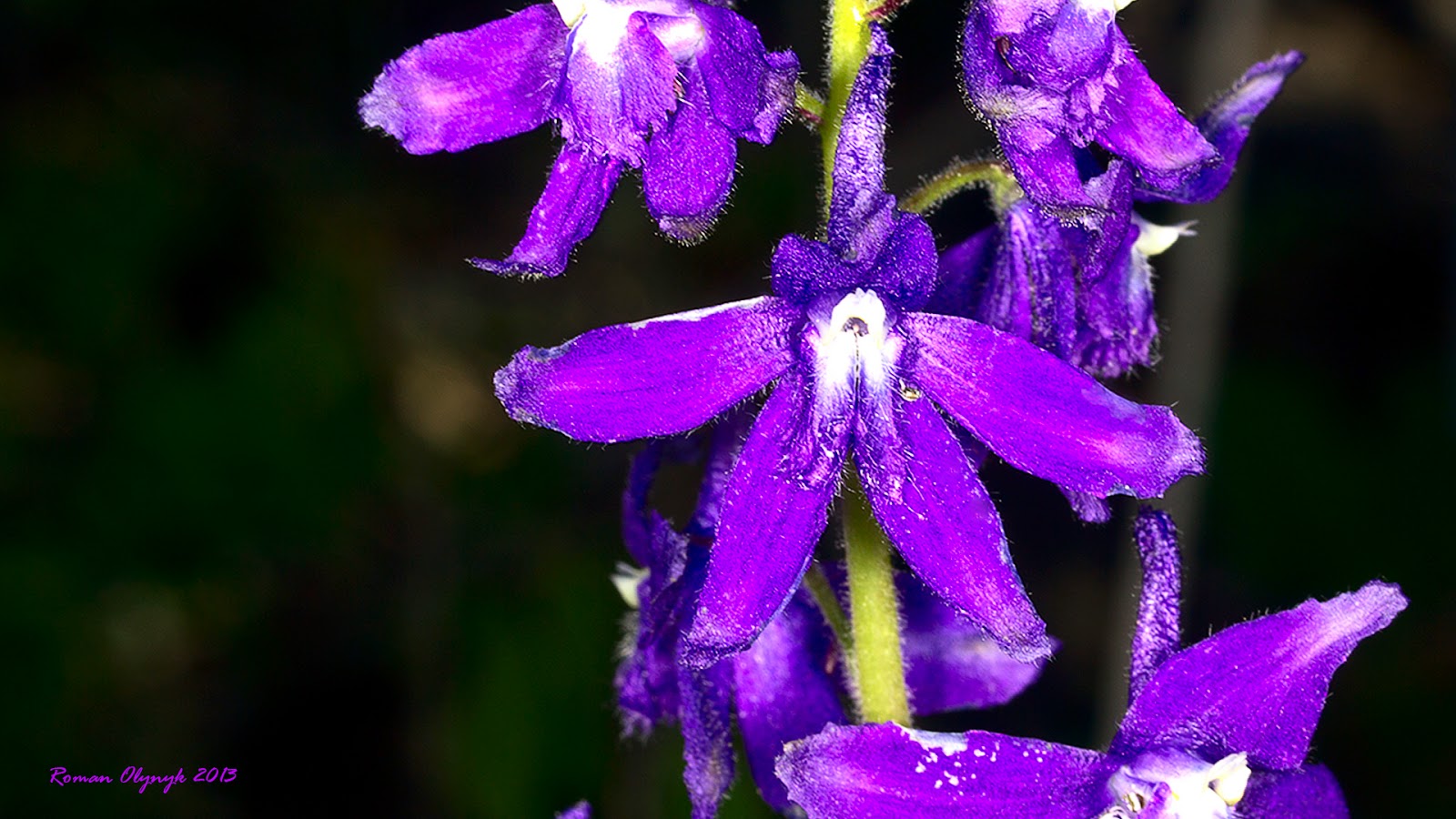 According to a writeup I found at Midwest Native Plants, Gardens, and Wildlife, these plants are pretty toxic.  Another name for the plant is staggerweed, given for its effect on cattle.

The title of this blog post?  It comes from this relic of the past.
Posted by Banewood at 8:13 AM No comments:

Wild Blue Phlox (Phlox divaricata), aka "Sweet William." A card-carrying native to forests in eastern North America.  These are a bit later than last year, when I shot some on April 2. 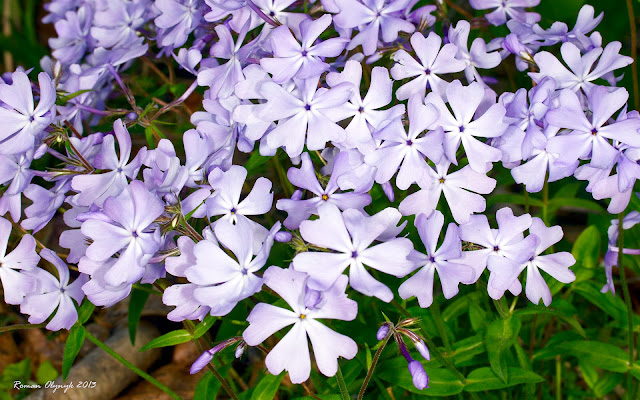 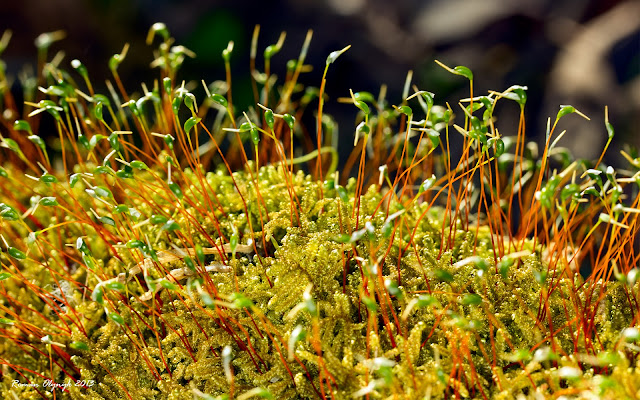 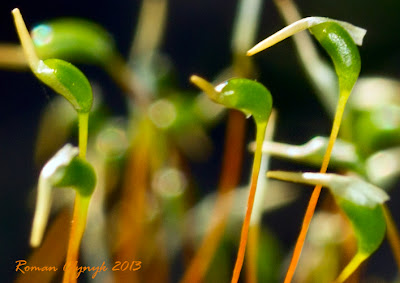 The Bluebells that I posted a couple of days ago came with a challenge.  They were nice, but I thought that I could do better.  I knew where to look:  down below the Earl L. Core Arboretum is where I remember seeing the heaviest growth of Bluebells in past years.

To get there, I parked my car at the Star City portion of the Rail Trail and biked back towards town, past the sewage treatment plant.  It smelled as bad as it sounds.  I didn't even bother to snap a picture of the Fumb Duck that was bobbing for delicacies in the settlement pond.   But there was a reward:  Bluebells  (Mertensia virginica) as far as the eye could see. 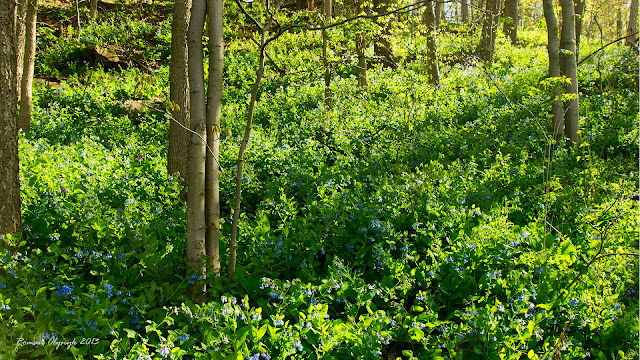 I was able to get a better closeup, too: 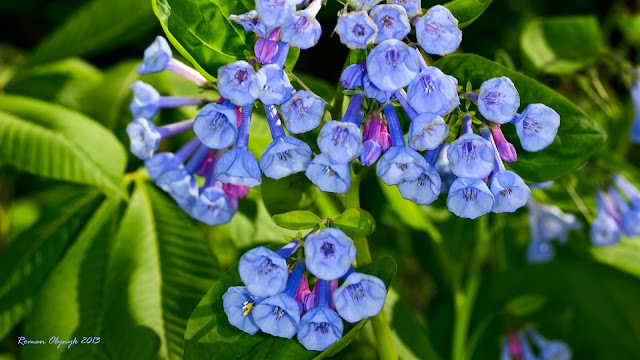 Posted by Banewood at 4:38 PM No comments:

The Virginia Bluebell (Mertensia virginica) remains a challenge for me to shoot.  This one, taken on April 23 is my best effort to date, and my best is none too good. This subject needs more depth of field, but perhaps I just need to really step back and get lots more of the plants.  To do that, I'll need to go along the river below the WVU Arboretum, where I've seen the Bluebells covering the ground for as far as the eye can see.
Posted by Banewood at 6:46 AM No comments:

If you look closely at the picture of the two trilliums that I shot yesterday evening, you'll notice some fiddleheads growing to the left of them.  These are the furled fronds of young ferns.  How's that for alliteration? They're edible, and quite tasty as I recall, but it's been years since I've eaten any.

Here are a couple of additional shots for your visual consumption.  I'm told that these are Christmas ferns (Polystichum acrostichoides). 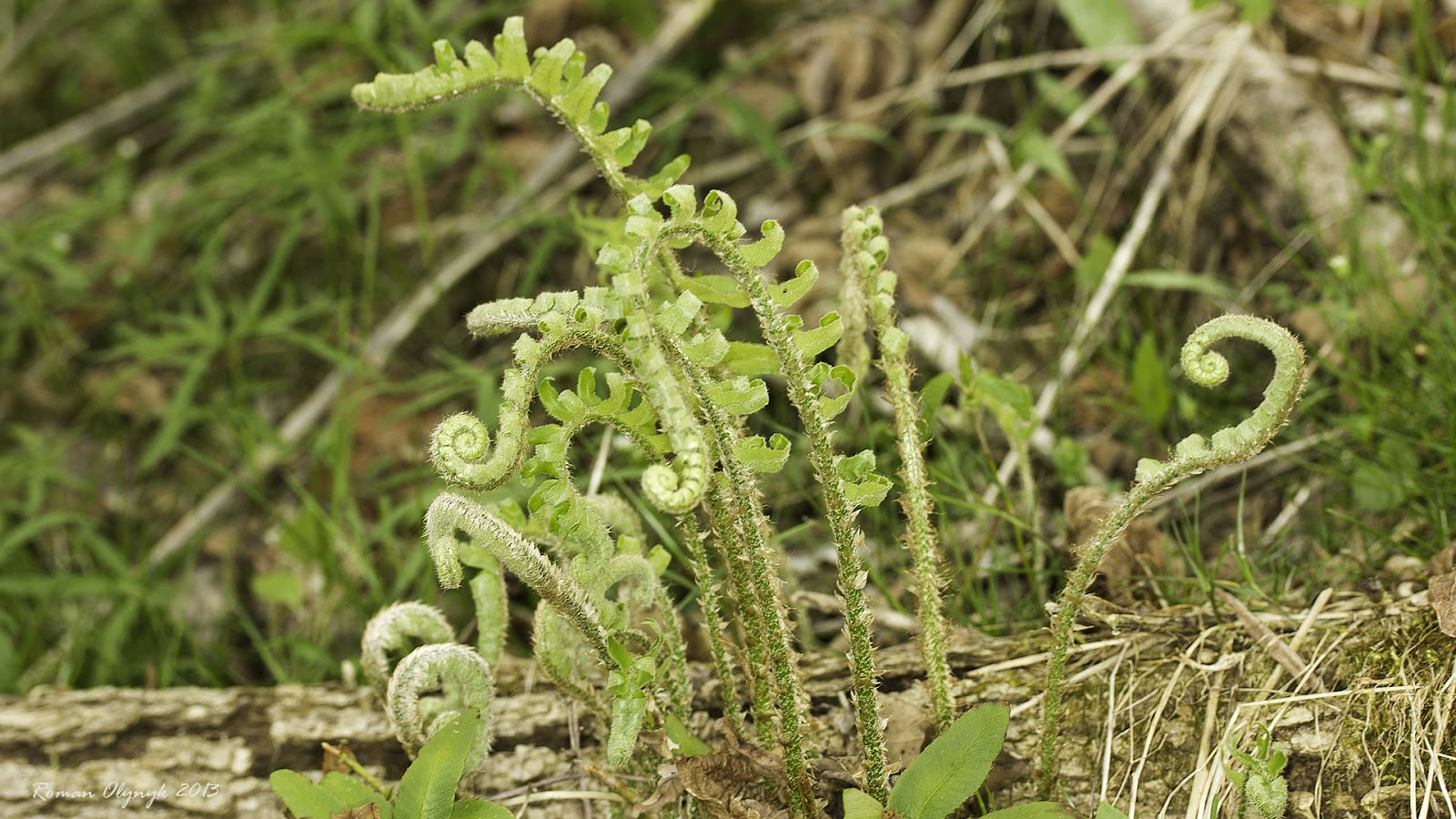 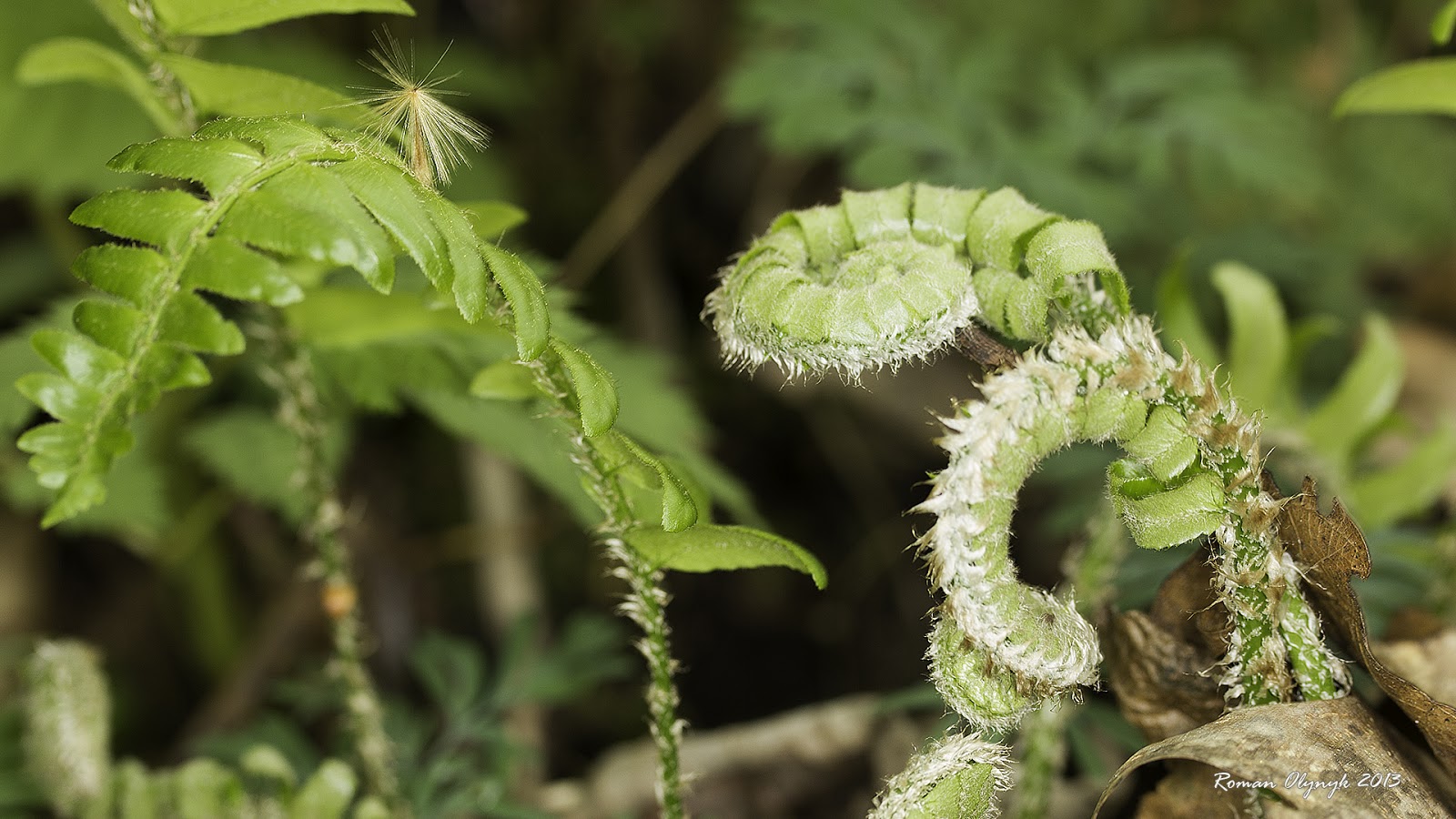 With fronds like these, who needs anemones?
Posted by Banewood at 6:56 AM No comments:

The Red & The White

I think Rick Santorum predicted something like this happening:  a Red Trillium, aka, Wakerobin (Trillium erectum) and a White Trillium (Trillium grandiflorum) are seen here cohabiting in the woods. 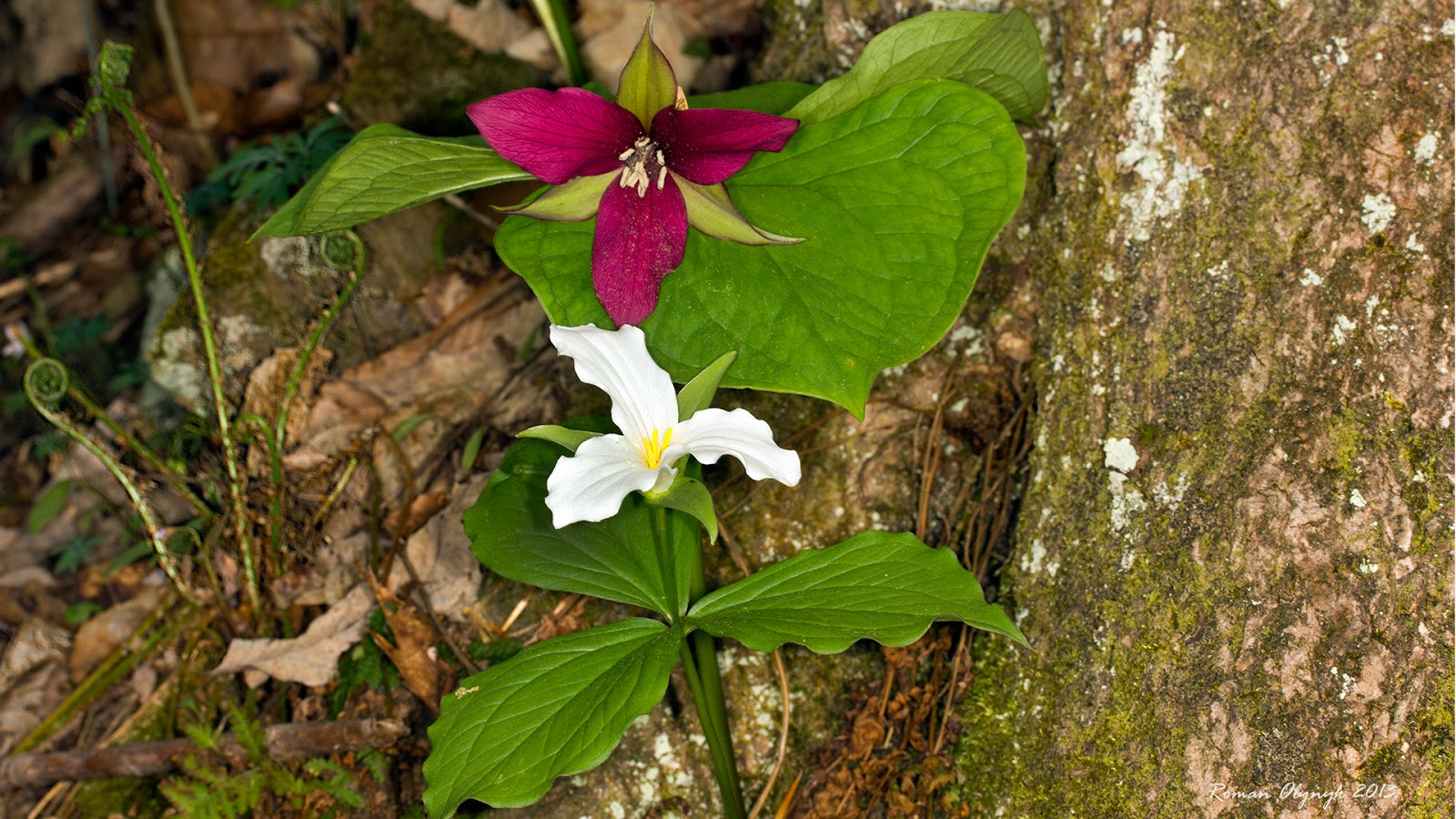 Taken today on an after-work bike ride south of the Hildebrand lock & dam.
Posted by Banewood at 9:49 PM No comments:

I stumbled upon a C/Net news item titled Microsoft reportedly testing smartwatch prototypes.  Now I doubt that I'm the first, and I know that I won't be the last, but here's the first thought that came into my mind: 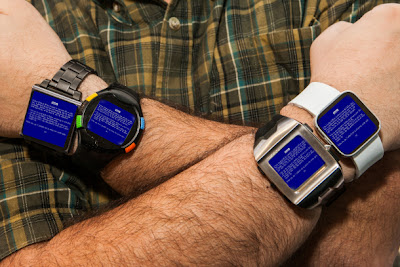 Posted by Banewood at 3:56 PM No comments:


Tilt–shift photography is the use of camera movements on small- and medium-format cameras, and sometimes specifically refers to the use of tilt for selective focus, often for simulating a miniature scene. Sometimes the term is used when the shallow depth of field is simulated with digital post-processing; the name may derive from the tilt–shift lens normally required when the effect is produced optically.

Do date, I've only been able to produce faux tilt-shift, using PhotoShop or an iPhone app like Snapseed.  An outfit called Lensbabymakes them in prices ranging from $80 to several hundreds of dollars, but I've been entertaining notions to make my own someday.

But someday doesn't always come, or at least not soon enough.  Rather than trying to simulate a miniature scene, I went directly to a real miniature scene.  Witness a co-workers model N gauge railroad yard: 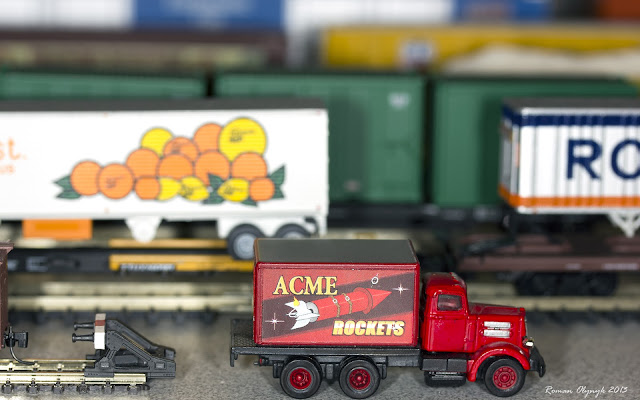 This was shot using a Canon EF-S60mm f/2.8 Macro USM lens and a ring flash.   The center of the iris was edited to remove the reflections from the flash.  You'd almost expect to see James Bond appear there. 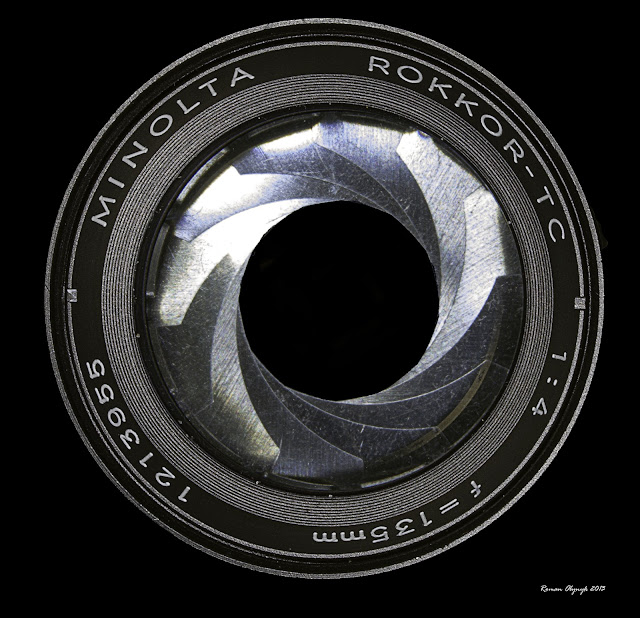 This old lens is non-focusing, meant to be used with an old macro bellows from that same era.  Check out the 12-blade diaphragm!
Posted by Banewood at 3:49 PM No comments:

Posting a few more shots taken from last Saturday's bike ride.  Notice how the photographer got down nice and low to shoot these lovelies straight-on instead of looking down.  That photographer has poison ivy AGAIN.  Some people just never learn. 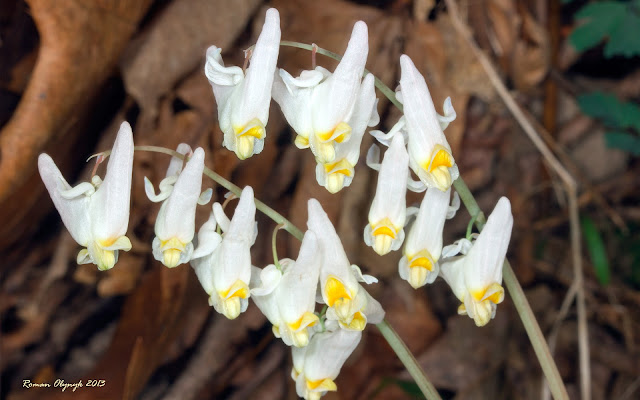 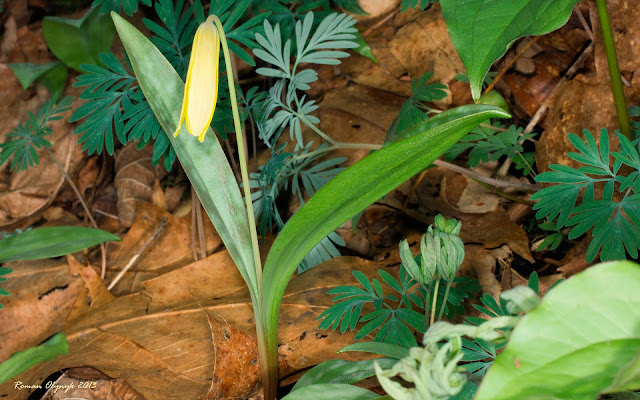 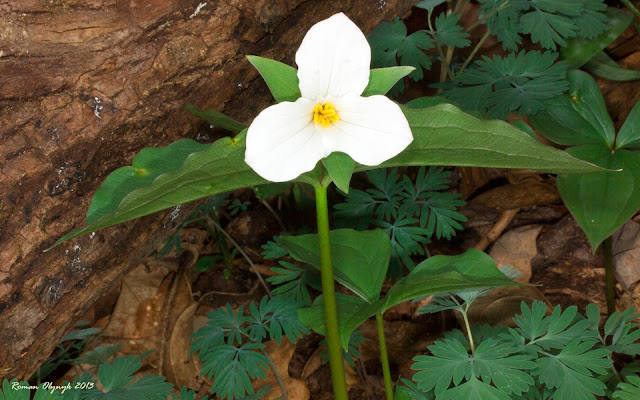 Posted by Banewood at 9:33 AM No comments: 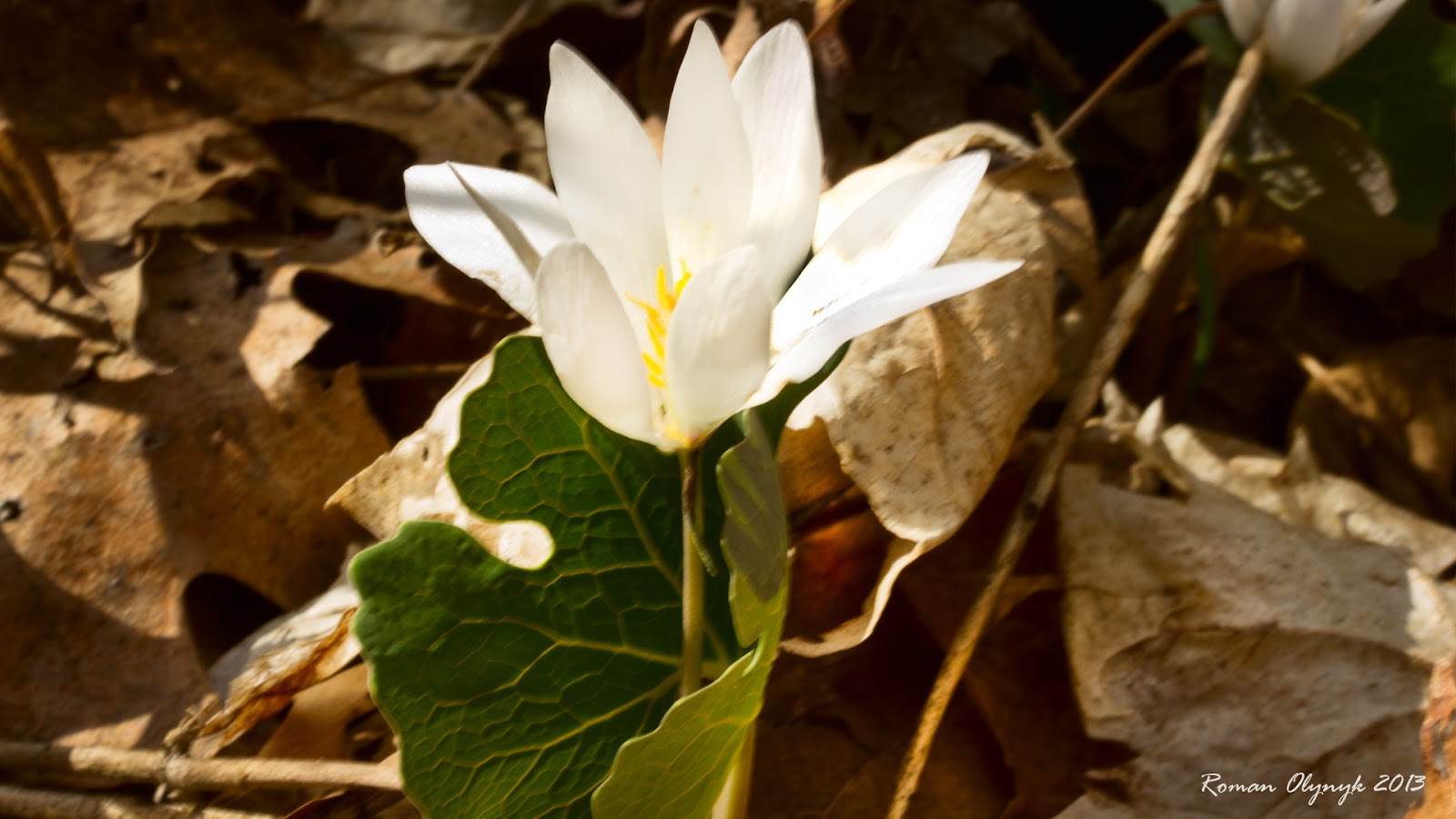 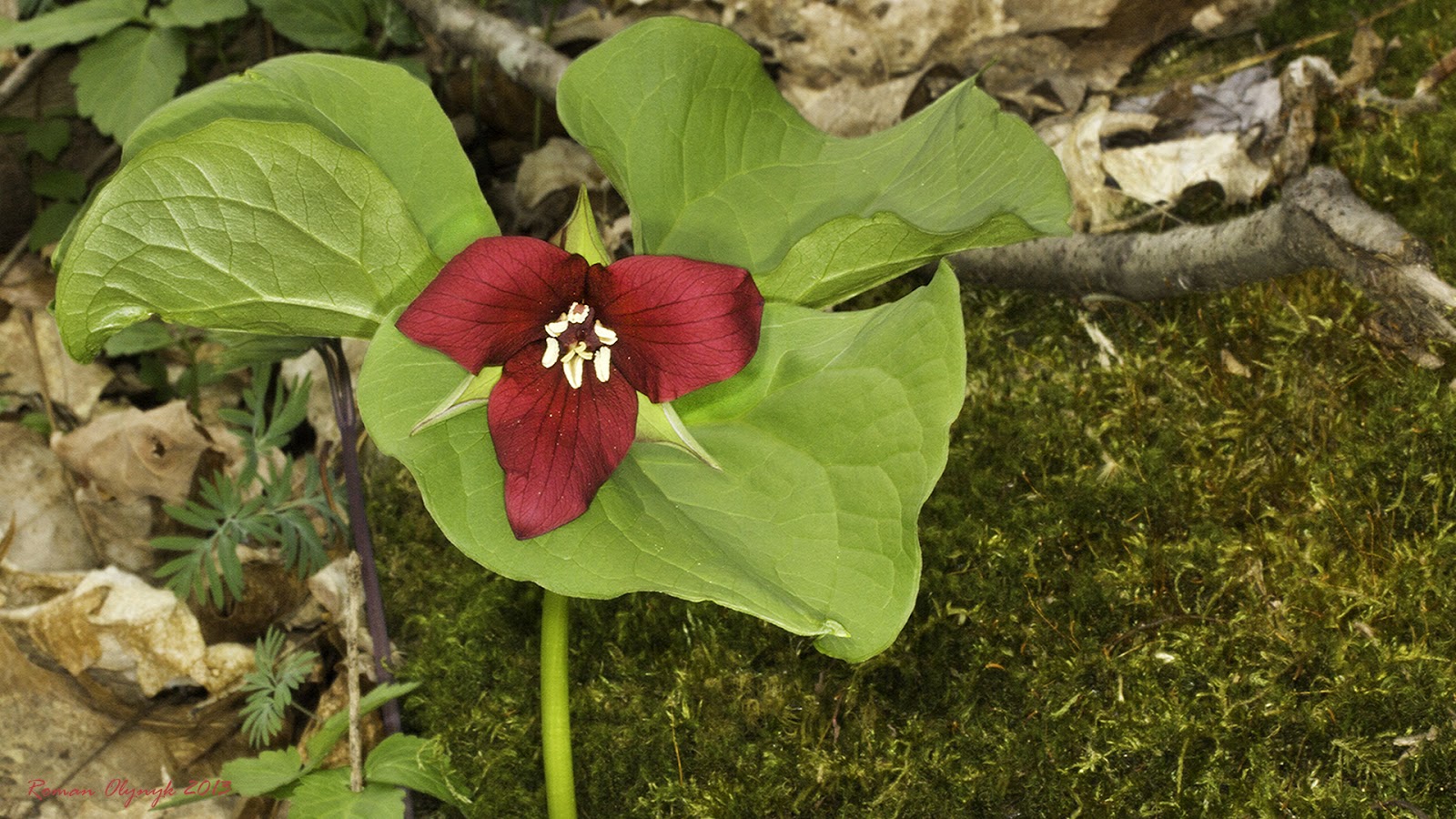 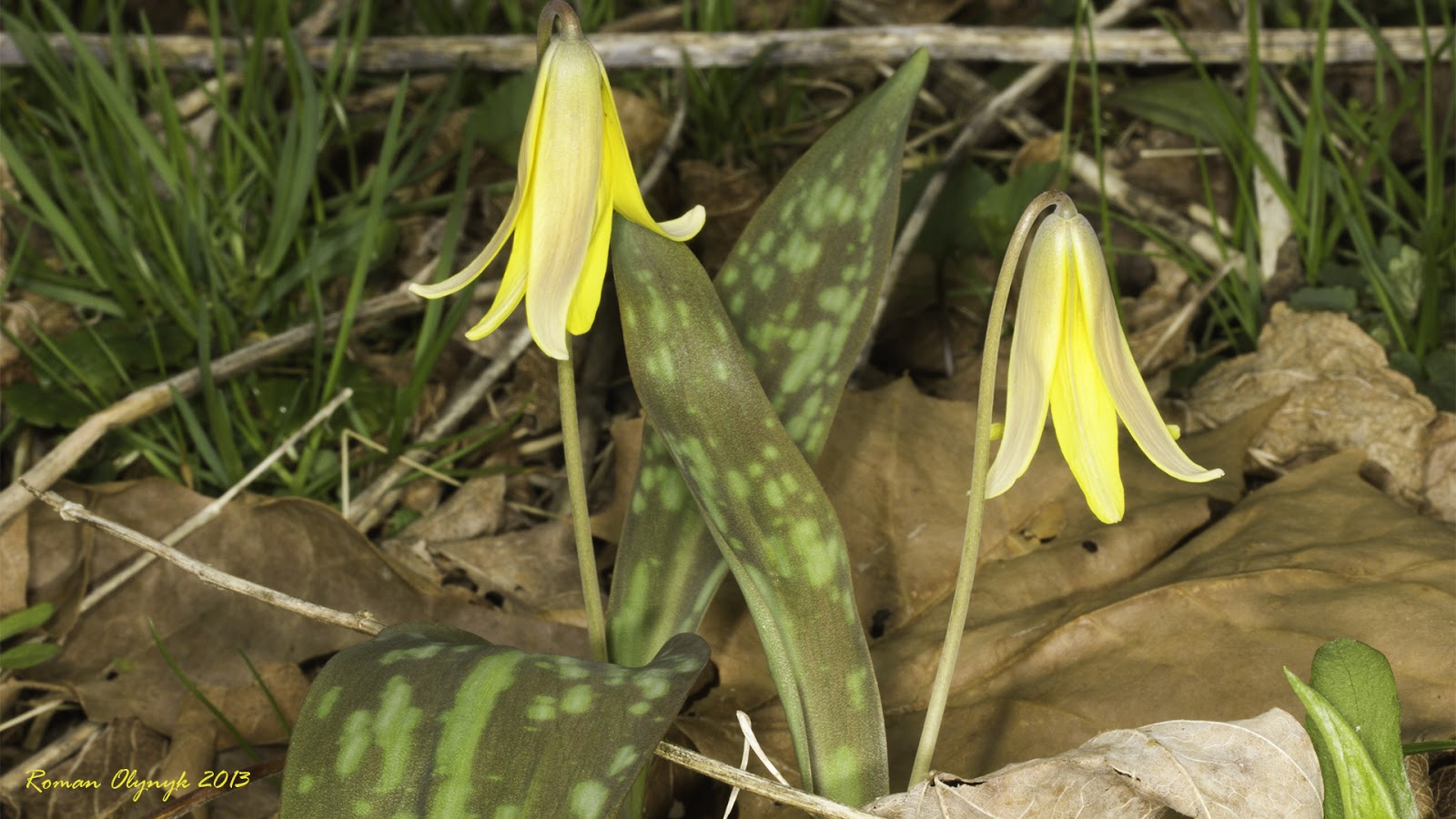 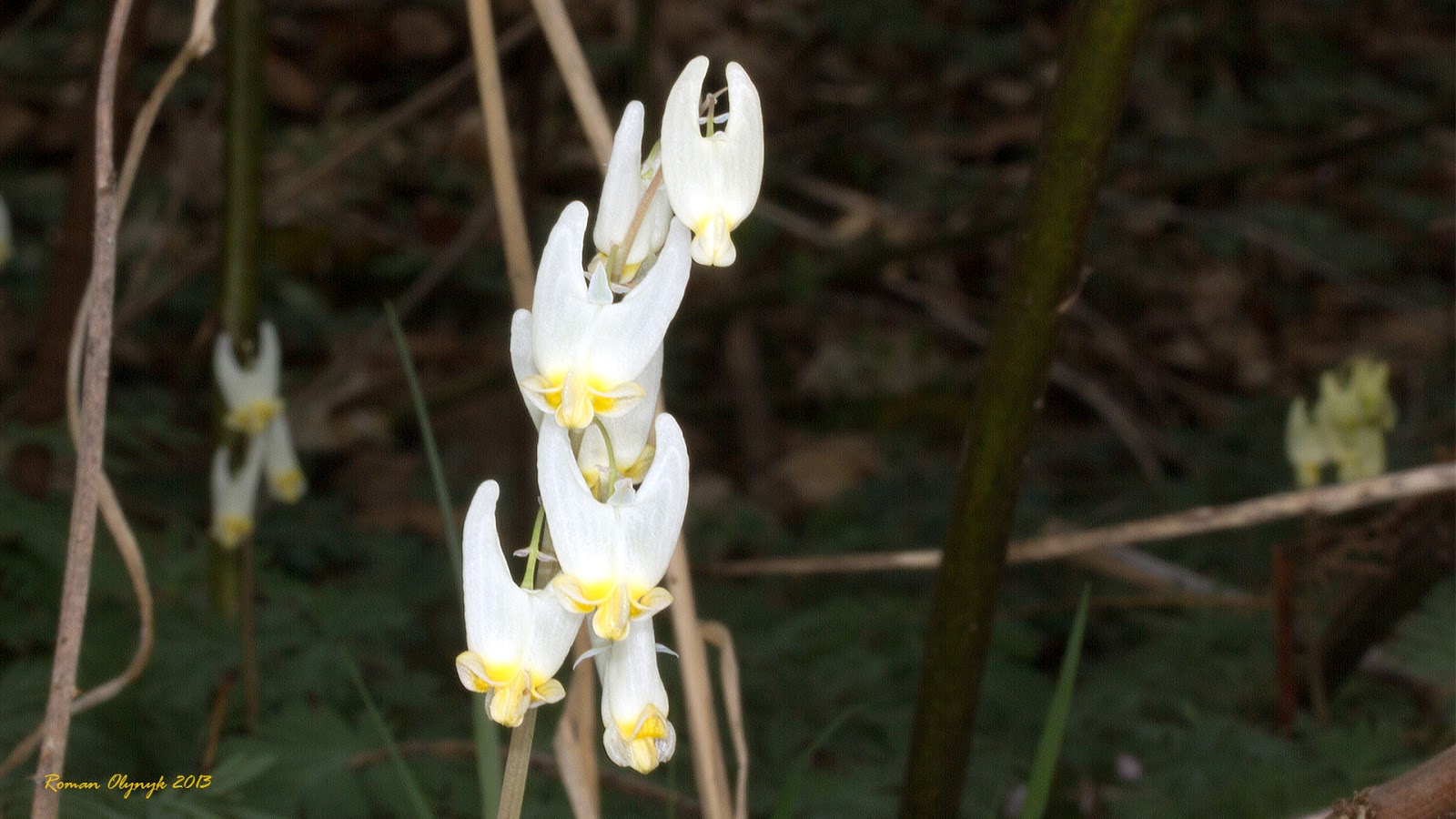 Posted by Banewood at 2:26 PM No comments: 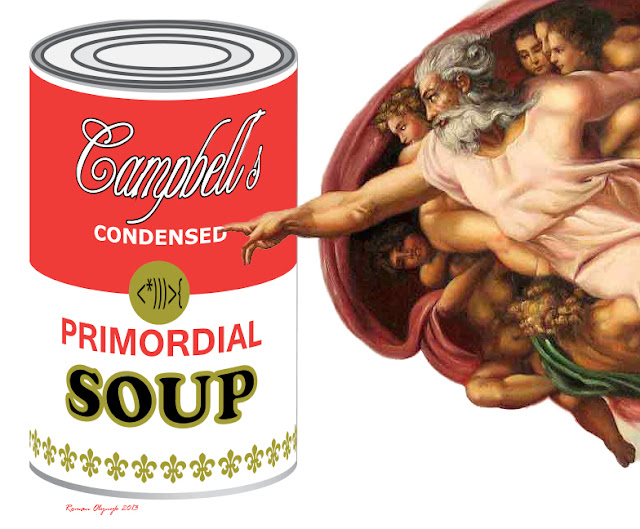 I couldn't leave well enough alone.  The soup can needed a bit of work (it still does), so I re-worked the picture to the version you see above.   Below is the originally posted version: 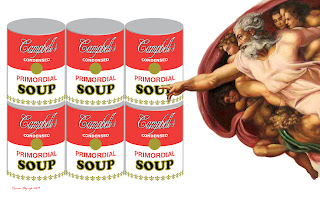 Posted by Banewood at 1:48 PM No comments:

Below is another one of Saturday's Decker's Creek pictures.  It's too dark for general consumption, but I like it nonetheless. 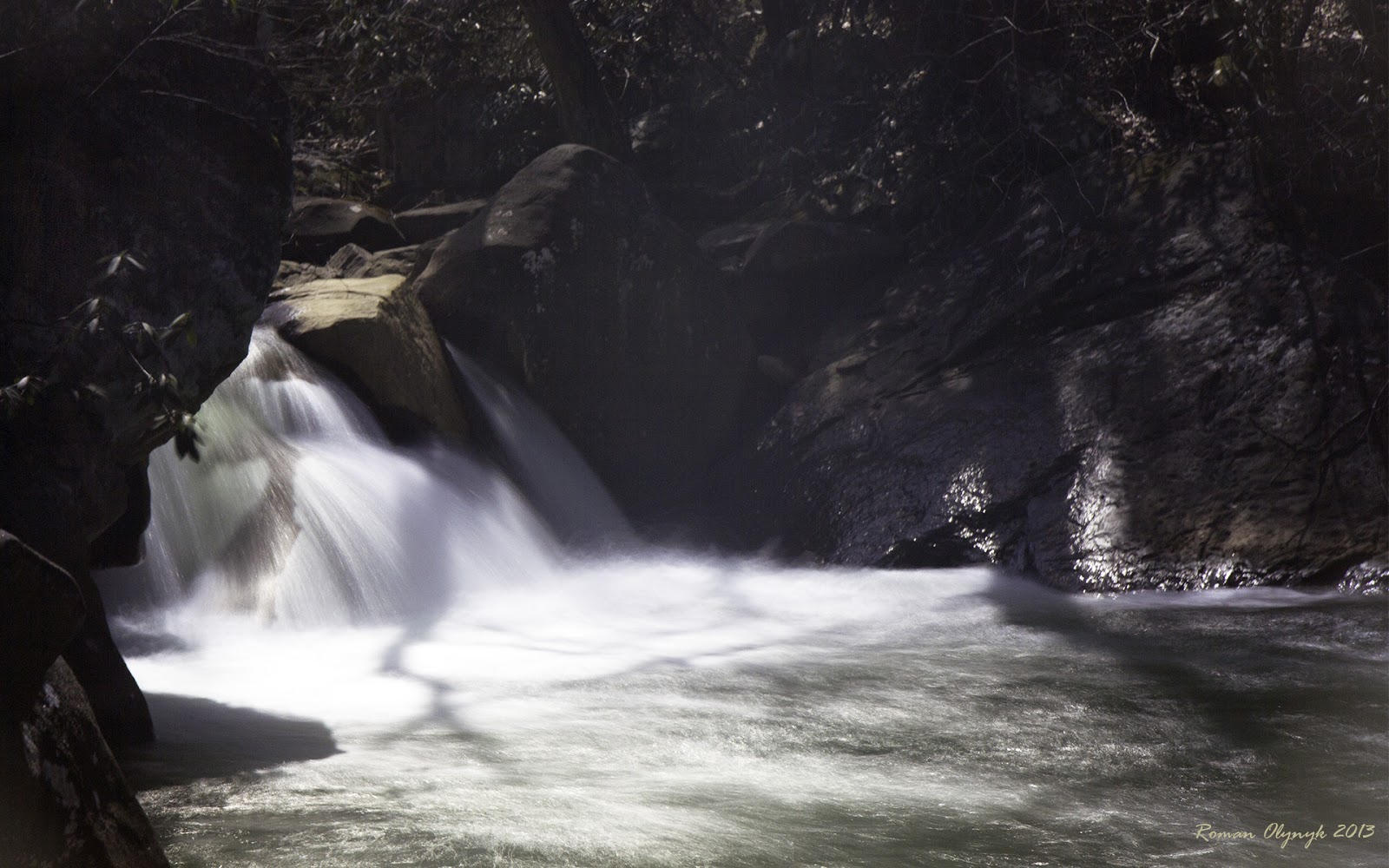 You can see the better-lit version of this shot here.
Posted by Banewood at 9:18 AM No comments: 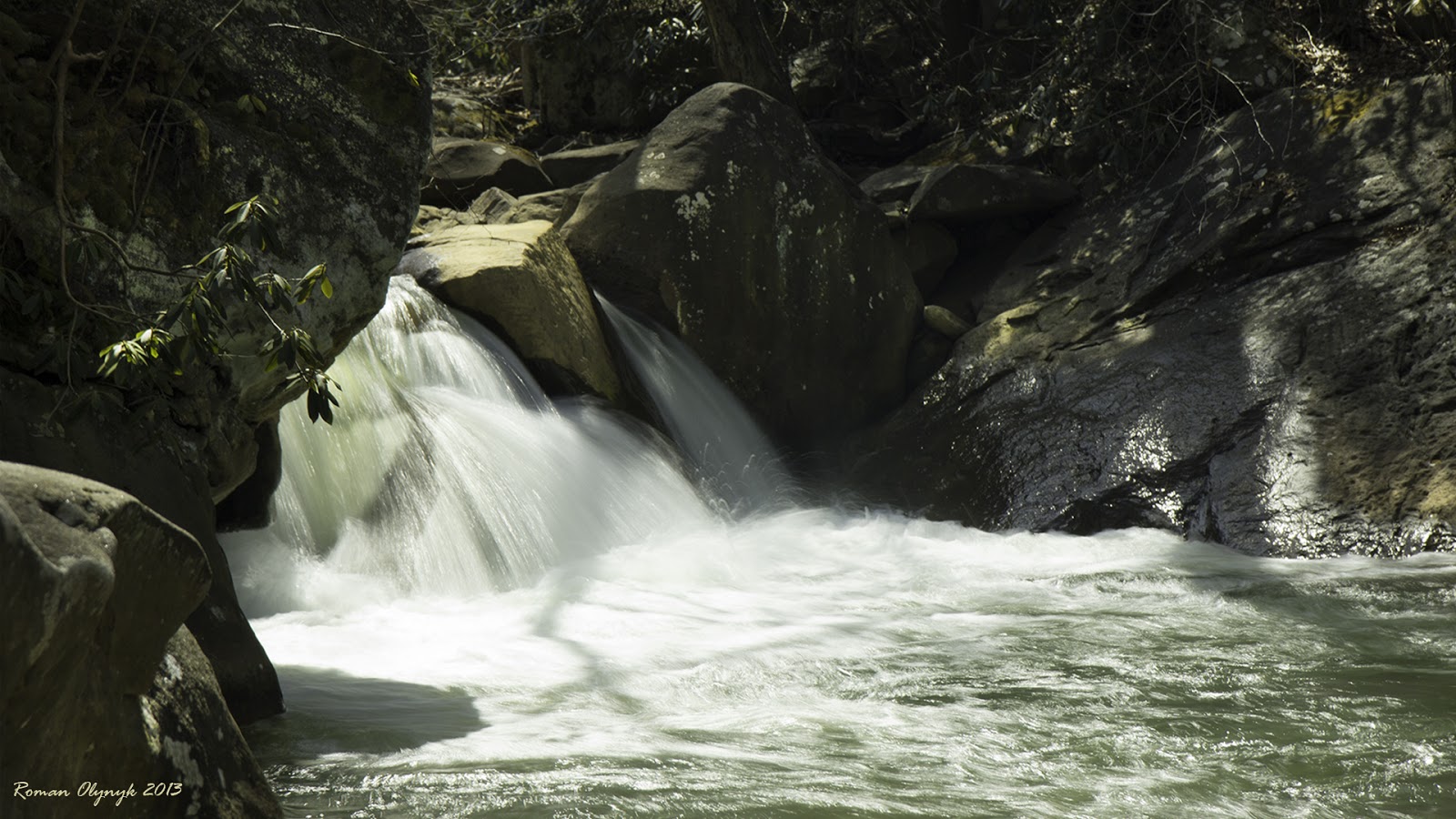 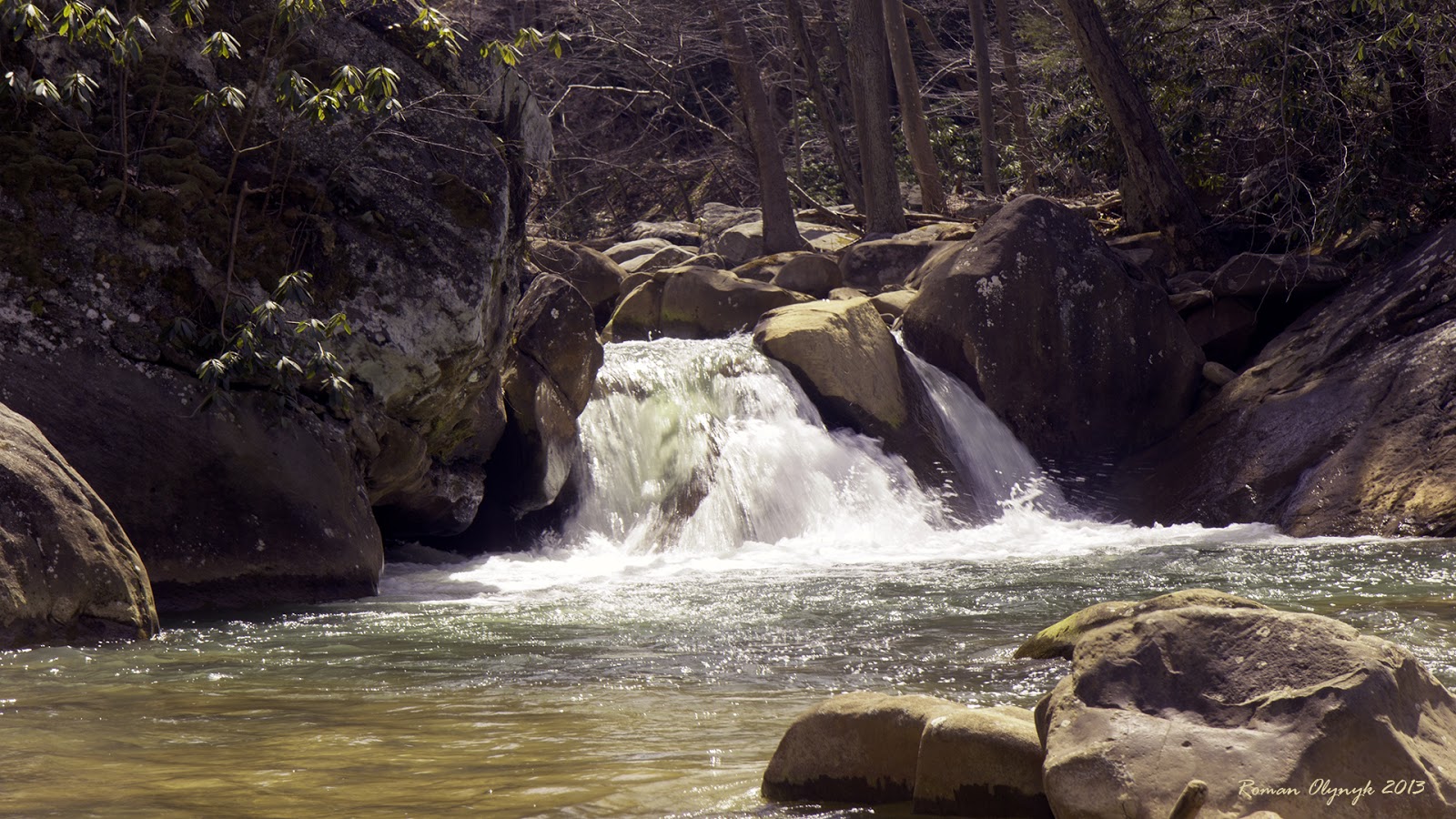 Posted by Banewood at 9:29 PM No comments:

Sadly, this isn't The Onion

One of my favorite sites of late is called The Ononeon. Its motto is "It's not funny, 'cause it's true." I suppose that this helps to differentiate it from the humor site, The Onion, which is fake news that's often interpreted by some people to be reports of true events.

Headlines on The Ononeon are typically links to original posted reports elsewhere.  A recent News Highlight for example offers this tag:

The tag links to a piece on The Raw Story by David Edwards (Monday, April 1, 2013 14:19 EDT) Robertson: God gives fewer miracles to ‘too-educated Americans’ who learn science.  It sounds made up.


Televangelist Pat Robertson on Monday explained to his viewers that “sophisticated” Americans received less miracles because they had learned “things that says God isn’t real” like evolution.

On Monday’s episode of CBN’s The 700 Club, Robertson responded to a viewer who wanted to know why “amazing miracles (people raised from the dead, blind eyes open, lame people walking) happen with great frequency in places like Africa, and not here in the USA?”

“People overseas didn’t go to Ivy League schools,” the TV preacher laughed. “We’re so sophisticated, we think we’ve got everything figured out. We know about evolution, we know about Darwin, we know about all these things that says God isn’t real.”

Don't try to think too hard about what he's saying; it may hurt your head.  You'll have better results with this logic (transcript follows):

Posted by Banewood at 9:03 AM No comments:

To Infinity and Up Close!

The Polaroid film that I was initially disappointed with may not be as bad as I thought.  Maybe it was just me.  I brought the SX-70 into work yesterday and offered a photographer friend a chance to try it out.  His result are much better than mine: 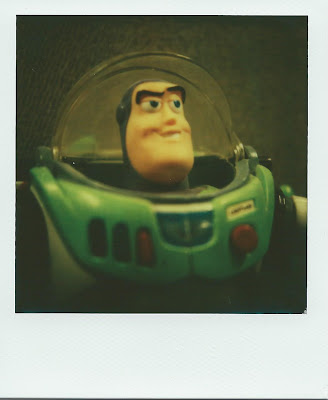 This is Buzz Lightyear, if you don't recognize him, shot in my cubicle under florescent lighting.  This was shot hand-held, and the exposure wheel was dialed to darkest.    I'd like to make excuses that all of my shot, which were overexposed, were taken in daylight.  Yeah, I'll stick with that one.

Apropos to the photo above: 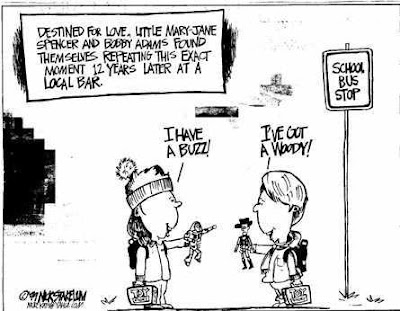 Sorry, I couldn't resist.
Posted by Banewood at 8:07 AM No comments: