Now here I thought that it was getting too late in the season for flowers... 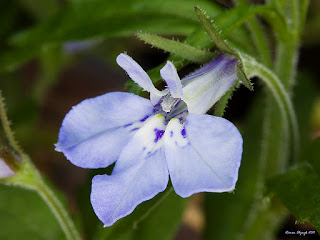 This is a tiny flower, about the size of the nail on my pinkie. It's blooming now, as I write this, inside of a large pot on my front porch. The "real" flowers in the pot are all dead, and my wife claims this is a weed. At least she didn't plant it. Since it is in a pot, maybe it hitched a ride in the potting soil or with the geraniums that were planted in it.

The kind folks at the WVU Greenhouse have identified it as Lobelia erinus or one of its hybrids.

This photo marks a bit of an improvement in my technique. I used an Orbis light ring to provide the extra light that I needed to get more depth-of-field than I've been able to get in normal lighting situations -- particularly on a November evening.

Posted by Banewood at 8:30 AM No comments:

It's getting a little nippy for flower pictures, so I thought I'd post something relatively recent (and appropriate).

Meet the Frost-weed aster (Aster pilosus), shot below the Morgantown Lock & Dam about a month ago. 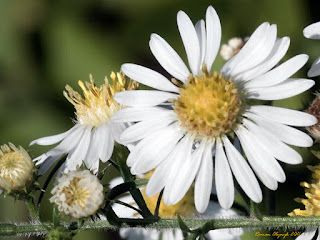 Eating a Mediterranean diet combined with physical activity can help to improve some of the symptoms of sleep apnoea, according to new research.

The study, which is published online in the European Respiratory Journal, looked at the impact a Mediterranean diet can have on obese people with sleep apnoea, compared to those on a prudent diet.

Obstructive sleep apnoea syndrome (OSAS) causes frequent pauses of breathing to occur during sleep, which disrupts a person's normal sleeping pattern. It is one of the most prevalent sleep-related breathing disorders with approximately 2-4% of the adult population experiencing the condition. This percentage increases up to 20-40% with obesity, and weight loss is often an essential part of the recommended treatment plan.

The researchers, from the University of Crete in Greece, examined 40 obese patients suffering from OSAS. Twenty patients were given a prudent diet to follow, while the other 20 followed a Mediterranean diet*. Both groups were also encouraged to increase their physical activity, mainly involving walking for at least 30 minutes each day.

In both groups, the patients also received continuous positive airway pressure (CPAP) therapy which involves wearing a mask that generates an air stream, keeping the upper airway open during sleep.

The researchers monitored the patients during a sleep study, known as polysomnography. This involved monitoring several markers for OSAS, including electrical activity in the brain, eye movements and snoring. The patients were examined at the start of the study and again 6 months later.

The results showed that people following the Mediterranean diet had a reduced number of disturbances, known as apnoeas, during the rapid eye movement (REM) stage of sleep, which usually accounts for approximately 25% of total sleep during the night.

The findings also revealed that people following the Mediterranean diet also showed a greater adherence to the calorie restricted diet, an increase in physical activity and a greater decrease in abdominal fat.

Posted by Banewood at 8:39 AM No comments:

Efforts by some in Congress to dismantle clean air laws are a threat to public health, experts warn in a "Current Issues" article published online today in the American Journal of Preventive Medicine.

Less than 2 per cent of its 535 members (of congress) have professional backgrounds in science. In contrast, there are 222 lawyers, whom one suspects largely avoided science classes in college. Lawyers are trained to win arguments, and as any trial lawyer will tell you, that means using facts selectively for the purposes of winning, not to establish the truth. No wonder ideology and rhetoric have come to dominate policy discussion, often bearing little relationship to factual reality.

Posted by Banewood at 9:39 AM No comments: