Dispatch from the Taliban Nation

In a bit of belated reading, I came across a March 6, 2008, item from gallup.com. Do Muslims Want Democracy and Theocracy? is an excerpt from the book Who Speaks for Islam?

The book is the product of a mammoth six-year study in which the Gallup Organization conducted tens of thousands of hour-long, face-to-face interviews with residents of more than 35 predominantly Muslim nations — urban and rural, young and old, men and women, educated and illiterate. It asks the questions everyone is curious about: Why is the Muslim world so anti-American? Who are the extremists? Is democracy something Muslims really want? What do Muslim women want? The answers to these and other pertinent, provocative questions are provided not by experts, extremists, or talking heads, but by empirical evidence — the voices of a billion Muslims.

So, when asked about democracy, most Muslims want a democracy, but one based upon Sharia, which is a code of law based on the Koran.

In only a few countries, such as Jordan, Egypt, Pakistan, Afghanistan and Bangladesh, do the majority want Sharia to be the only source of legislation.

Interestingly, a 2006 Gallup Poll in the US finds that a majority of Americans want the Bible as a source of legislation.

Welcome to the Taliban Nation. Leave your sandals at the door.
Posted by Banewood at 12:21 PM No comments:

Back in 1999, scientists had sent a robot inside to survey the reactor. The robot returned with samples of a particularly black fungi, indicating an abundance of the biological pigment melanin.

Arturo Casadevall, a microbiologist from the Albert Einstein College of Medicine at Yeshiva University in New York, thought that the presence of the melanin might be significant. Melanin is typically associated with 'protective' properties. Melanin in skin, for example, absorbs and safely transforms different electromagnetic wavelengths, such as DNA-damaging ultraviolet light.

In an experiment scientist analyzed three different types of fungi, including Cladosporium sphaerospermum, the species abundant in and around Chernobyl. Using ionizing radiation from the radioactive isotope, cesium-137, they exposed the fungi to radiation doses similar to those inside the damaged reactor. 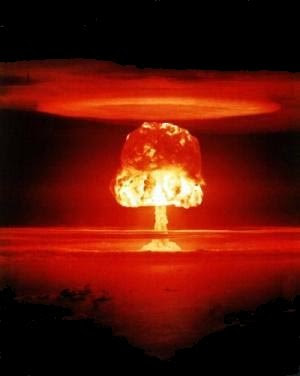 Melanin-containing fungi exposed to the radiation – even when deliberately starved of nutrients – grew significantly larger and up to 2.5 times faster than fungi without melanin and those not exposed to radiation.

Even though the melanin-containing fungus was starved of typical fungus nutrients, it prospered. Although still a tentative hypothesis, the evidence indicates that the melanin might be converting radiation into nutrients for the fungus, somewhat like how chlorophyll converts sunlight into energy for a higher plant. If true, this is astounding.

This is like the discovery of chemosynthesis around hydrothermal vents deep in the ocean. In the deep, dark ocean, a bacteria was found to metabolize hydrogen sulfide given off by the vents. A relatively diverse ecosystem (organisms such as shrimp, crabs, tube worms) was found to exist entirely upon the bacteria.

If it could happen there, perhaps it is possible that life could similarly evolve around a food chain fueled by radiation.

Worms are playing a new tune

An InfoWorld article today, New worm transcodes MP3s to try to infect PCs, reports on the appearance of a nasty little worm.

The worm, designated by Kaspersky as "Worm.Win32.GetCodec.a," takes advantage of Microsoft's Advanced Systems Format filetype for audio and video streams. If you play an infected file in that format, it prompts you to download a codec. Instead of the codec, however, you're downloading and installing a Trojan horse, which installs a proxy program that allows hackers to route other traffic through your PC.

Once it takes off, the worm will look for other MP3 files on your system,transcode them to Microsoft's WMA format, wrap them in an ASF container and then add links to more copies of the worm.

Unlike earlier Trojans, which used the WMA format only to mask their presence on the system (i.e., the infected objects were not music files), this worm infects audio files. According to Kaspersky Lab virus analysts, this is the first such case. The likelihood of a successful attack is increased because most users trust their audio files and do not associate them with possible infections. It should be noted that the file on the counterfeit web page is digitally signed by Inter Technologies and is identified by www.usertrust.com, the resource that issued the digital signature, as trusted.

As Dr. Raymond Stantz would say, "This is a really nasty one!"
Posted by Banewood at 12:09 PM No comments:

Moo On Over Greenhouse Gasses

Oh give me a home where the buffalo roam,
and I'll give you a whole lot of gas.

PHYSORG.com reports on a study by scientists at the National Institute of Agricultural Technology in Argentina. By attaching plastic balloons to the backs of cows and running collection tubes from their stomachs, scientists were surprised to find that a standard cow produces between 800 to 1,000 liters of "emissions" (mostly methane) each day. 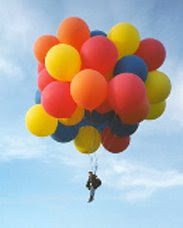 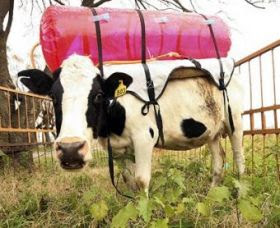 Well, if you must know, methane is 23 times more effective than carbon dioxide at trapping heat in the atmosphere.

The misguided scientists are now studying how changes in a cow's diet can reduce the amount of methane. It seems to me that capturing and using the methane as an alternative fuel would make a whole lot more sense. I'm studying this myself, and I'll give you an update on my findings.... as soon as I can get my feet back on the ground.

Posted by Banewood at 8:27 AM No comments:

Musical Monday - Putin on the Ritz

A well-done musical parody, featuring Bush and Putin (my two favorite sub-humans).
Some little pop-up ads appear at the bottom of the play screen -- you can X out of them.


(A tip of the hat to Marta for sharing this with me.)
Posted by Banewood at 8:32 AM No comments:

I remember having to do a history paper back when I was in the fourth grade. The title of my paper was Phoenicia, Land of the Arts. I illustrated it in an old-fashioned cut 'n paste style, with illustrations from old National Geographic magazines. In an inspired burst of creativity, I made the title page and headers out of assorted fonts and letters that I also clipped from magazines -- the colorful ransom letter effect worked well with my subject matter. It was a well-deserved "A," IMHO.
Some time later, when I had another paper to do, I used the same ransom note technique on the title page. I don't remember the paper topic or the grade, but I remember that it didn't go over that well a second time. Maybe if it had been another teacher...
The point (you're surprised that I have one?) of this anecdote is that it has a certain similarity to recent political activity. In the last presidential election, a lot of political hay was made of John Kerry's flip-flopping.
I Actually Did Vote for the $87 Billion, Before I voted Against It
Well, hey, it worked in 2004. Let's try it again. So John McCain supporters are making ham-fisted attempts at painting opponent Barack Obama as a flip-flopper on Iraq troop withdrawal (or anything else that might work, for that matter). I guess that this tiresome recycling of the "tried-and-true" is second nature for a conservative.
While we are at it, perhaps Obama has a Dukakis/Willie Horton-style spectre that we can raise.
Really, I'm only kidding.
Posted by Banewood at 2:43 PM No comments:

Academic Freedom is Just Another Word

A July 9 New Scientist article, New legal threat to teaching evolution in the US, warns that "Intelligent Design" is once again worming its way back into education. Although Intelligent Design received a legal trouncing in Dover, Pennsylvania, back in 2005, the folks behind it have been hard at work putting new lipstick on that pig.

On the heels of Ben Stein's 2008 movie, Expelled: No Intelligence Allowed, the new wedge issue has become academic freedom. But this isn't the academic freedom that grants academics the ability to do research and publish, it is the freedom to legislate that high school teachers must teach "the controversy" and "critical thinking skills."

Yes, I can see where one's belief in a literal interpretation of the Bible goes hand-in-hand with the exercise of one's critical thinking skills.

It's sobering to hear (actually, it makes me want to do a double) that the governor of Louisiana, who is a strong supporter of this bold new interpretation of academic freedom, is on the short list as a potential vice presidential nominee for John McCain. Praise the Lord and pass the snakes!

Posted by Banewood at 9:59 AM No comments: