A Seven-spot I Did Spot With My Eye

While photographing some wild irises by the Opekiska lock & dam, my eye did see a seven-spotted ladybug (Coccinella septempunctata) bopping around on a plant.  The little bugger was constantly on the move, but I managed to get off a couple of quick hand-held shots, one of which turned out pretty much dead-on. 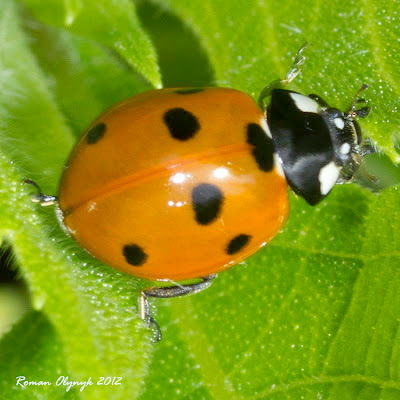 Interestingly, this ladybug is a non-native species, having been introduced numerous times for pest control.  They love munching on aphids. According to Wikipedia, this ladybug has been designated the official state insect of six different states (Delaware, Massachusetts, New Hampshire, Ohio, Pennsylvania, and Tennessee).  Irish ladybugs need not apply.
Posted by Banewood at 9:29 AM