It's somewhat of a cop-out to start the year posting some old pictures from March of 2010, but -- hey -- it's got to be better than nothing, right? 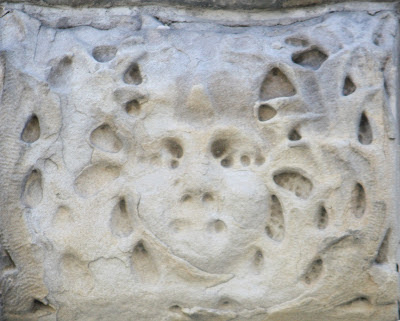 Can you guess what this is?  If you can, then you're pretty good on your Morgantown architecture.  It's the mascaron figure on the far left corbel beneath the balcony of Stewart Hall.

Judging from the patterns around these faces, I suspect that these mascaron figures seem to represent a generic "Green Man" --  a  sculpture, drawing, or other representation of a face surrounded by or made from leaves. Branches or vines may sprout from the nose, mouth, nostrils or other parts of the face and these shoots may bear flowers or fruit.

Here are the rest of the faces in closeup, starting on the other side, with the second and third from the left: 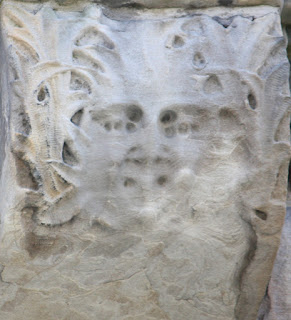