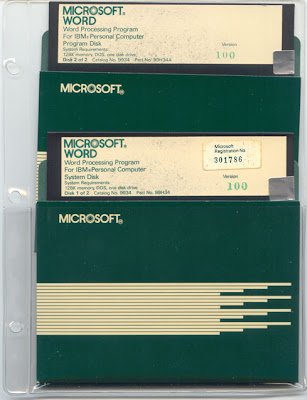 With the potential eBay success of my GEM Suite, I thought that I'd continue my thread of DOS-related curios. One of the real treasures in my collection is Version 1.00 of Microsoft Word.

Microsoft Word was officially released on October 25, 1983. This was the first word processor for the IBM PC that showed actual line breaks and typeface markups, such as bold and italics, directly on the screen while editing.

Years ago, I literally rescued this copy of Word for DOS from the dumpster at work. It comes in a dark green, plastic-covered three-ring binder. Packed inside were the Microsoft Word Word Processing Program manual (Copyright 1983), as well as the Customer Service Plan/Service Support Warranty booklet, a Quick Reference Card for IBM Personal Computer, and a pre-paid Microsoft Product Line Product Information form. In addition, this early version of Word came on two (count them: two) 5.25-inch floppy diskettes. A third disk contains the drivers for the Microsoft bus mouse. The bus mouse is so-named because it is attached to a special ISA bus card -- this was even before standard mouse ports appeared on the back of the PC case.

A fascinating detail about this software is in an "Easter Egg" that I had once read about in a trade magazine. I used an old DOS sector edit program (Central Point Software's PC Tools) to locate the following ASCII text on the program disk:

Here's what it looks like on the original impact printer paper that I saved:

I think that I had read about this Easter Egg in PC Magazine, but I cannot verify it. The "trashing program disk" part was supposed to be a scare for people who were using a pirated copy of Word. I recall something to the effect that the person who placed that code in the program might have had to find a new job.

What's interesting is that that version of Word probably includes all the features that I use (except hyperlinks).

"Tree of Life" didn't cause any job losses. I used to maintain that code. I know precisely where it came from. Word was, like all our apps code at the time, interpreted and this was in the interpreter and that came from the author of the interpreter who was an extremely smart guy and a huge asset to Microsoft. They're lucky they didn't fire him. My successor as keeper of the interpreter removed that code when it started appearing due to stack overflows when TSI programs caused the stack to get too deep when they interrupted. He told me that management said that this was his most important contribution. It was a few lines of code snipped. That was a much more innocent time when programmers were expected to be mildly (or strongly) eccentric so this sort of thing, while frowned on, was accepted.