In a previous post, I mentioned that the entire DOS version of Microsoft Word came on two 5.25-inch floppy diskettes. Given that these floppies date back from 1983 and they have only one write-protect notch, I have to deduce that they are the 360K variety and not the new 1.2 M.

Here's a directory listing of what's on the first floppy: 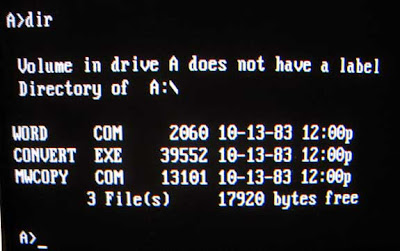 Note there are three files listed, which have a total size of 54,713 -- that's only approximately 54K! Now the listing also says that there's 17,920 bytes free, so I'm guessing that there must also be some hidden files on this diskette.

I'm really out of practice with my DOS commands and I practically have no utilities left with which I can sniff around on the diskette. Since the Word.com file is only 2060 bytes large, I think it's also safe to assume that it must be linking to some hidden stuff on this floppy.

Here's what's on the second WORD diskette. I used a /W flag on the DIR command, so that I would get a multi-column listing that would fit on the screen. Unfortunately, the /W flag also leaves off the file sizes.

There may very well be hidden files on this diskette. What you see here, however, is very little in the way of real program files, mostly some .PRD printer drivers. There are a couple of sample .DOC files and a couple of .STY files. Could these be early incarnations of Word Style templates? I wish I could really play with this stuff to find out.

My final comment on all of this is a matter of perspective. You're looking at the entire Microsoft Word program (minus Mouse drivers, which are on the third floppy) on two (count them, two) 360K diskettes. Not even 720K total, given that there's free space on both floppies. I wonder how large Word 2007 is?