In an earlier posting, I described the Polaroid SX-70 that I recently acquired.  I ordered a laser-cut leather skin from Etsy, and over the Labor Day holiday I started on removing the old skin.

I watched some YouTube videos about removing old skin, so I did not go into this unprepared.  However, I'm not particularly proud of my results.

I got some Pro Power Goo and Adhesive Remover, which was recommended in one of the how-to videos.  This helped some, but  the old glue was incredibly stubborn.    I used a straight-edge razor scraping tool and I tried to be as careful as I could in removing the skin and adhesive, all the while being careful to not get any of the Power Goo into the camera.  The glue was like a rock.  I managed to slip a bit along some edges where I left some scars.  I used a dremel tool to smooth out those scars, but the end results were still far from perfect. 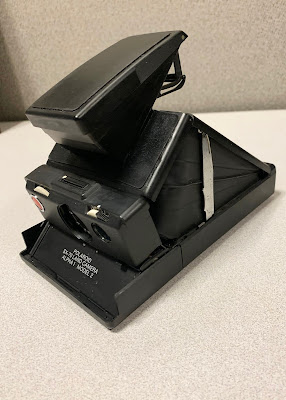 I'm showing the side with the worst scarring.  Note the left side of the triangle above the bellows.

Did I ruin this camera's resale value?  Maybe.  Probably.  It's still one hell of a nice camera, though.
Posted by Banewood at 10:06 AM