Stranger in a Strange Land

Last night was one of those rare occasions where I possessed a semblance of a normal life.  Wife and I went to see Foreigner at the Creative Arts Center with a friend. 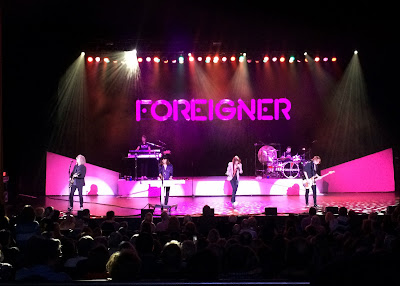 I don't think anyone from original band was there, but you'd never know if from the sound.  No sign of founding member Mick Jones in last night's lineup.

Front row:  The guy on the far left is Bruce Watson.  Next is Tom Gimbel, master of guitar, flute, saxaphone and keyboards.  The new lead singer is Kelly Hansen, who is a fitting substitute for Lou Gramm.  On the bass is Jeff Pilson.
In the back, on keyboard, is Mike Bluestein, and on drums is Chris Frazier.

After the band returned for an encore, they brought on a chorus of kids (don't know if high school or college) to accompany them on "I Want to Know What Love Is."   That was probably my favorite song, although I've been known to bastardize the lyrics to it.