The other day, I noticed this woolly bear caterpillar on my back porch. 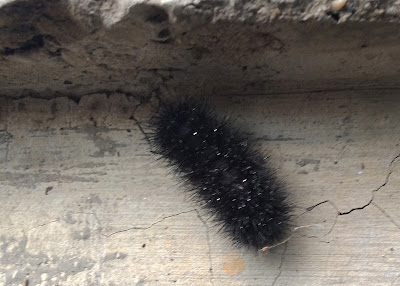 According to the Old Farmer's Almanac


The Woolly Bear caterpillar has 13 distinct segments of either rusty brown or black. The wider the rusty brown sections (or the more brown segments there are), the milder the coming winter will be. The more black there is, the more severe the winter.

Elsewhere in the article, there's this:


there could, in fact, be a link between winter severity and the brown band of a woolly bear caterpillar. “There’s evidence,” he says, “that the number of brown hairs has to do with the age of the caterpillar—in other words, how late it got going in the spring. The [band] does say something about a heavy winter or an early spring. The only thing is … it’s telling you about the previous year.”

Let's hope that the prediction is wrong,
Posted by Banewood at 10:33 AM