Saturday was a nice day, in the mid- to high-fifties.  There was some cloud cover, however, and the sunshine wasn't what I had hope it it would be.  I took a ride on I-68 east to Bruceton Mills, WV, to try out a Fader variable neutral density filter that I had gotten on Amazon.  The neutral density cuts down on the amount of light coming through the lens, allowing one to use a much slower shutter speed than one normally could.  The slow shutter is particularly nice for blurring falling water.

This was shot at 1/5 sec; f/4.0; ISO 100.  Although this is not necessarily a great picture, it bodes well for future efforts.  Frank Lloyd Wright's Falling Water house on a bright Spring day is definitely going on my bucket list. 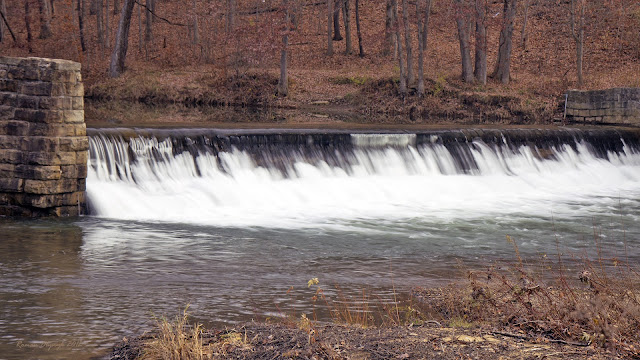 From the Wikipedia entry:


Bruceton Mills is a town in Preston County, West Virginia, United States along Big Sandy Creek. The population was 74 at the 2000 census. An early settler, John M. Hoffman, named this community for his stepfather, George Bruce, who claimed direct descendance from Robert the Bruce, King of Scotland.

It's kind of sad that there's not much on the Web about the history of the dam. There was obviously some milling activity there some time in the past, but little information is available.

The electronic West Virginia Encylopedia does mention that Bruceton Mill on the Big Sandy Creek was among the largest of Preston County's 50 grist mills. There were at least five mills on this site after the first one was built in 1792.
Posted by Banewood at 9:26 PM