One of my current challenges is to get a decent shot of some goldenrod.  It's not as easy as it might seem because the plants are often in motion with the slightest breeze, and because there's so much to their depth-of-field.

The Sweet Goldenrod (Solidago odora) specimen below is the best that I've managed so far.   It's temptingly close to perfection, but it still falls short.   This was with the help of a small tripod, which allowed me to sit on the ground in some poison ivy.  It was a somewhat overcast day, do I couldn't push the depth-of-field too far and still maintain an acceptable shutter speed.

I used Adobe Lightroom to dodge some oversaturated areas, and I put in a slight vignette effect. 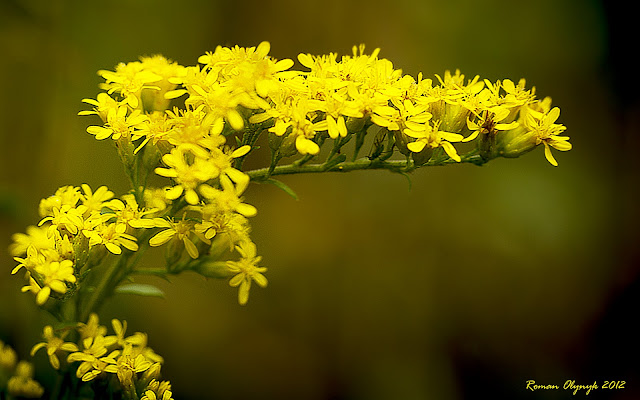 Yesterday was #textureblendphotography day on GooglePlus, so I looked for something that might qualify for that theme.  Ultimately, I chose this variation on the Sweet Goldenrod, running it through PhotoShop's texturizing filter with a "sandstone" setting.

The results are nice, rendering the image as sort of  a Japanese silk painting.  I might have to go back and tone down some of the vertical highlights, though. 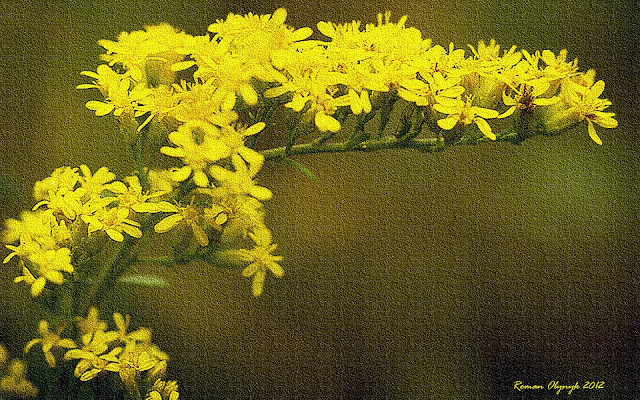 A final thought (yeah, right) is the dilemma I have when composing a shot like this.  I was able to give it a pleasing layout for a screen image.  However, when it came to cropping and sizing this for a standard photo paper format, such as 5x7 or 8x10, the results compromised the rule of thirds and diminished the results.
Posted by Banewood at 8:08 AM