Stubbonrness is in the Genes

Scientists at the Max Planck Institute for Human Cognitive and Brain Sciences in Leipzig think they may have found a genetic basis for "stubbornness." A single genetic mutation, called the A1 mutation, is apparently found in approximately one-third of the the population.

The biochemical theory behind this mutation is that it reduces the amount of dopamine receptors in the brain. Dopamine plays a key role in the learning process, the feeling of pleasure, and in motivation and reward. "Motivation and reward" in this case is interpreted as "learning to repeat behaviors that maximize rewards."

The scientists tested a group of 26 men, asking them to select one of two symbols. Each selection was followed by positive (smiley face) or negative (frowny face) feedback. Brain imaging, which was being conducted while the men took the test, showed that the group of men carrying the A1 mutation had diminished neurological activity in the posterior medial frontal cortex, an area of the brain involved in monitoring errors. 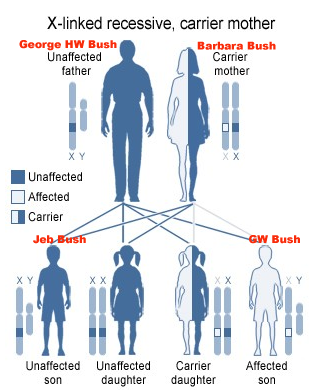 As a casual observer of obvious phenomenon, I cannot help but wonder if the A1 mutation has a similarity to one of the more famously documented X-linked mutations -- hemophilia. Without another un-mutated X chromosome as a buffer against stupidity, the male gets the full brunt of the A1 mutation.

Compare the chart on the left with the family tree of George Walker Bush. It could explain how a profound case of diminished neurological activity could manifest itself itself in our current president, yet be relatively benign in his brother, Jeb Bush.

GW's mother, Barbara, is doubtlessly a carrier. Her mother, Pauline Robinson, died when her father's car slammed into a stone while while he was supposedly trying to stop a cup of coffee from sliding about (she was a passenger in the car, and not in front of the stone wall). While this isn't the legendary mushroom cloud for stubbornness, it could be construed as a smoking gun for diminished neurological activity.