Our roller coaster ride is nearly at an end

Some scientists from the University of Kansas in Lawrence think that they may have figured out the reason behind the cyclical pattern of mass extinctions. At least for the last 500 million years, the number of species on Earth has regularly dropped approximately every 62 million years.

Physicists Adrian Melott and Mikhail Medvedev say that our solar system circles our galaxy, the Milky Way, in a roller coaster fashion. Every 62 million years, it reaches its highest point relative to the galactic plane, where it is closest to a source of deadly cosmic rays.

No longer being blocked by cosmic debris, powerful radiation particles called muons are more likely to strike the Earth and cause damage to DNA.

According to Melott, the zenith of the Sun's oscillations match almost exactly with the times of the dips in the fossil record. The last time that this was thought to have happened was 55 million years ago -- that gives us less than seven million years to get our affairs in order. 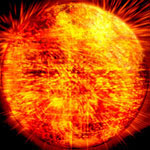 The roller coaster ride we took is nearly at an end.
I bought my ticket with my tears,
that's all I'm gonna spend.

And I think it's gonna be all right.
Yeah, the worst is over now,
The morning sun is shining like a Red Rubber Ball.

Red Rubber Ball by Simon and Garfunkel
Posted by Banewood at 8:29 AM