On my hike around Coopers Rock state park last weekend, I came across some interesting looking ferns.  They had typical green fronds, top and bottom, but the middle was taken up by a dark green band of spores. 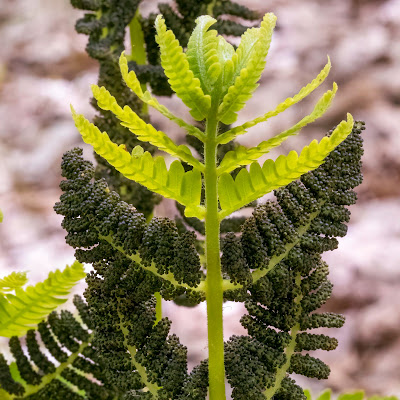 I've identified it as an Interrupted Fern (Claytosmunda claytoniana).  According to Wikipedia,

The Claytosmunda genus has only one species, Claytosmunda claytoniana .  The interrupted fern is native to Eastern Asia, Eastern United States, and Eastern Canada.

Fragmentary foliage resembling Claytosmunda claytoniana has been found in the fossil record as far back as the Triassic.   C. claytoniana is a paramount example of evolutionary stasis. Paleontological evidence indicates it has remained unchanged, even at the level of fossilized nuclei and chromosomes, for at least 180 million years.

Now I want to talk a little bit about the picture, itself.  I had a bear of a time capturing a decent image.  I was trying to take a hand-held shot in somewhat low light, and a slight breeze gave the image even more shake.

You can well imagine the amount of "noise" in the original picture.  This was one of those time that I appreciated the image editing software from Topaz Labs.  This was definitely a job for DeNoise AI.   I followed up that process with Sharpen AI.  The results up above really speak for themselves.

Here's what it looked like before the DeNoise and Sharpen: 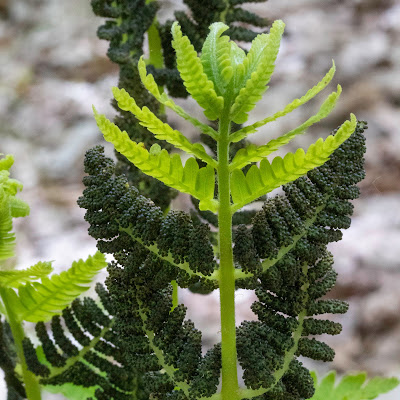