On Friday before Labor Day and again on Labor Day, I took a hike down the trail to the Henry Clay iron furnace at Coopers Rock.

These days, it's pretty rare for me to come across a new plant.   And this one is doubly notable, because it's also an orchid.   Meet the Downy Rattlesnake Plantain (Goodyera pubescens): 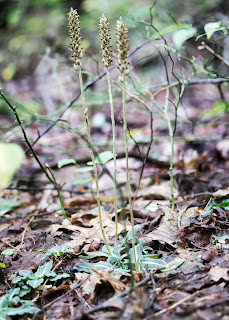 This shot composed of two different shots that were combined in PhotoShop is not very good, but I wanted to be able to show the entire plant.

Most of my shots showing the leaves were blurry.  I need to stop farting around and use my tripod!  This is the best of the lot: 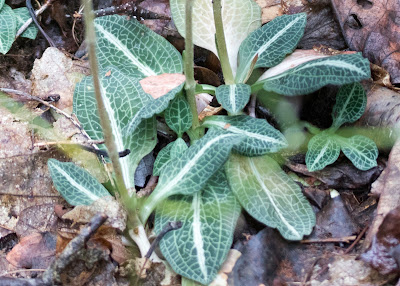 I wanted to show the leaves because of their reticulated pattern.  Oddly, when I tried to find the origin of the orchid's name, the emphasis is on their resemblance to the plantain.

Sadly, I missed catching this orchid in bloom.  Here's the inflorescence as I found it: 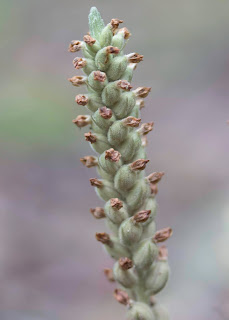 I was surprised to read that Goodyera pubescens is considered to be the most common orchids native to eastern North America.  How is it that I've only now stumbled across it?
Posted by Banewood at 11:30 AM