Late last year, I got the itch to go retro and started looking at old film cameras.  On the ShopGoodwill.com site, I took a chance on an untested Zeiss Icon Nettar 515/16.  It's the second one on this page.  What I got for about $22 was a NICE old camera that takes 6x6 cm pictures on 120 film.

Although I wasted no time in getting some black & white film and trying it out, I was slow in finally getting the film processed.  TheDarkRoom.com was a site that came recommended to me, and they are one of the few places that handle 210 film.  Part of the process includes scanning the negatives and posting the images online for you to download.  Price determines the resolution of the scan.

This camera is seriously manual.   You have to remember to wind it every time you shoot, ergo: 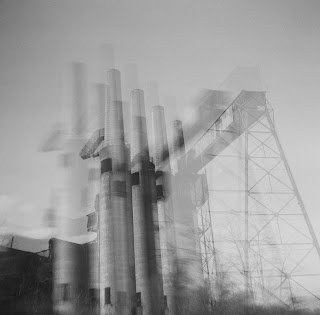 That's the old Morgantown Ordinance Works on the other side of the Monongahela River.   They used to make heavy water there as part of the Manhattan Project during World War II.

Here's one that came out a little better: 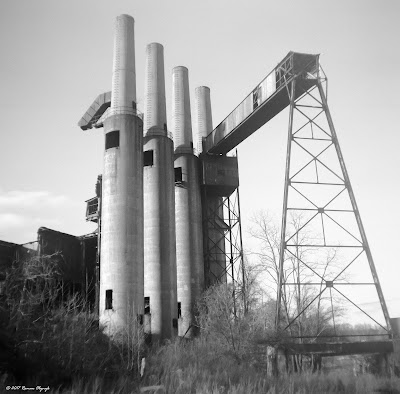 Other than a little spot removal, this is pretty much straight out of the camera.  I used Ilford HP5 black & white film at 400 ISO.  I'm sort of familiar with that film, because the Ilford preset is one of my favorite settings in the Silver Efex Pro suite by Nik.  I'm probably being snobbish here, but the real thing is so much better than the simulation.

Now that I've broken the ice, I can't wait to try this camera out some more!